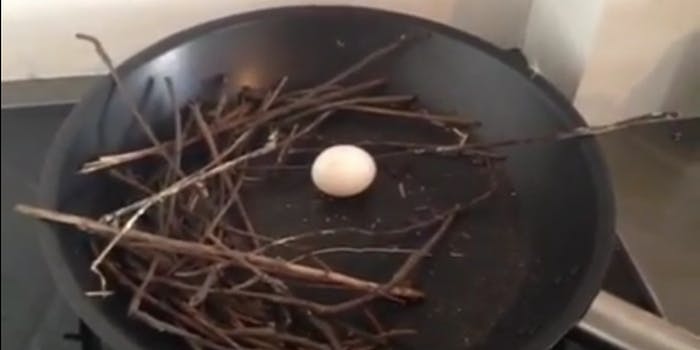 Don't worry—there are no current plans to make an omelet.

Pigeons are not typically known for their understanding of irony, but at least one bird in Norway has a sick sense of humor.

Stian Fjelldal returned home to his Oslo apartment on Monday to find his kitchen ransacked by a pigeon that had flown in through an open window. This pigeon, doing what pigeons do, had defecated pretty much everywhere. Naturally, Fjelldal was upset, but decided to document the carnage and the expulsion of the mischievous bird in a video he later posted to Facebook and YouTube.

But even Fjelldal couldn’t remain angry for long after discovering the pigeon’s punch line: a solitary egg laid in the frying pan on top of the stove.

Fjelldal told Norway’s VG News about his decision to film the scene: “It was chaos and a lot of feathers. My first thought was to get [the bird] out. As I have had doves inside before, I thought, this time I’ll document this.”

At first, you can hear him grumbling as he surveys the mess, but the unhappy Norwegian can’t believe his eyes and starts to laugh after noticing the egg and nest lying in his frying pan.

Fjelldal says he wanted to place the egg outside for the pigeon to retrieve, but was afraid of seagulls snatching it up. For the time being, the egg remains in Fjelldal’s frying pan, but he has some other plans for it that don’t involve making an omelet.

“I work at the Norwegian Enviroment [sic] Agency,” he said. “I may bring the egg into work so we can take some samples. We may find traces of pollutants, in that way the egg will come to some use.”