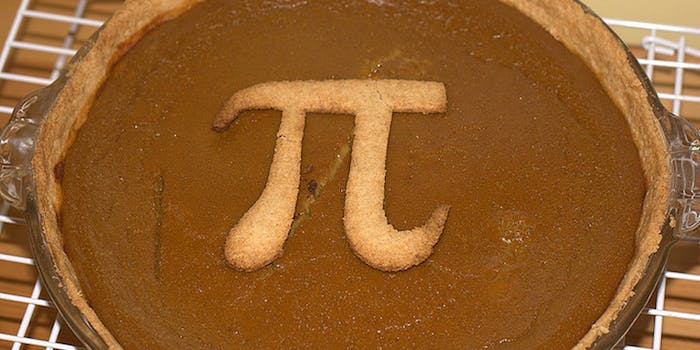 All the ways the pie-loving Internet celebrated Pi Day

If you live in America, rejoice, for today is March 14—numerically spelled 3.14, which makes it Pi Day!

If you live in America, rejoice, for today is March 14—numerically spelled 3.14, which makes it Pi Day!

Pi (π), or 3.14159, etc., is the number you get whenever you calculate the ratio of a circle’s circumference to its diameter. It is also an “irrational” number, whose digits go on forever without repeating. (This makes irrational numbers the exact opposite of irrational people, who do like to repeat themselves. A lot.)

Not all math fans celebrate Pi Day. Some mathematicians say pi is overrated and should be replaced by tau, or 2π, because if you’re a science or engineering type whose job requires you to calculate circles, tau is more useful than pi. Tau Day falls in June, on 6/28.

Vi Hart, the “professional mathemusician at Khan Academy,” is a staunch tau proponent, popular on YouTube for her math videos, especially the pro-tau video “Pi Is Still Wrong.” Still, Hart celebrated this year’s Pi Day with a “Singing Pi Gram,” an a cappella rendition of pi’s first several dozen digits.

(For people in Europe, today is 14 March, or 14.3, which is nothing special. With only 12 months in a year, Europeans can never experience the joy that is Pi Day unless they get a green card and immigrate to America, Land of Opportunity™.)

And the Internet knows that Pi Day, like every day, is a wonderful day for pie: