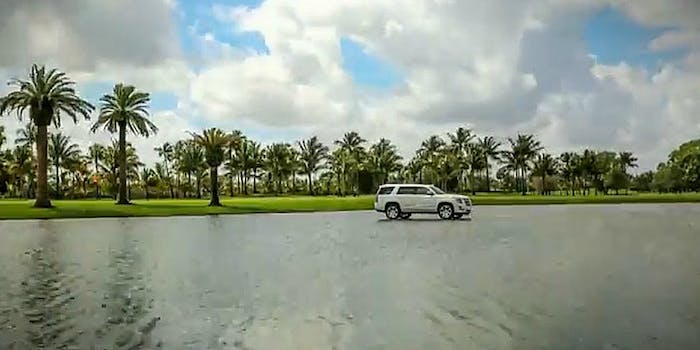 Behind the scenes with the PGA Tour’s floating cars

If you've ever wondered how the sponsorship cars at a PGA Tour golf event float on the water hazards, here is good news.

It’s rarely a good idea to ask a magician to reveal how his or her tricks are accomplished, because oftentimes that’s when the illusion (and the wonder and imagination of it all) disappears. Left in its place is the realization that the trick was obvious and that any idiot should have figured it out in the first place.

That’s why we don’t ask David Copperfield how he made the Statue of Liberty disappear and we don’t ask Penn & Teller how they produced this masterpiece.

But the PGA Tour is more than willing to show its viewers the behind-the-scenes video of how it makes the sponsorship automobiles magically float on the surface of the water hazards of its tournaments. And it’s a pretty damn cool process.

Like most tricks, the floating car seems obvious in retrospect. Put the car on a boat, drive it out to the middle of the lake, and place it on a platform just below the surface of the water. But like most magic, even the explanation isn’t necessarily as simple as it first appears.

After all, the team in charge of the floating cars uses GPS satellite coordinates, underwater divers who can’t see anything in the muddy lake, and hydraulic levers in a procedure that surely takes at least a few hours to complete.

If you’re watching the World Golf Championships on TV or if you’re attending the event live in Doral, Fla., this weekend, look for the floating cars and be prepared to tell everybody around you exactly how that trick is produced. I hear magicians love it when people do that.