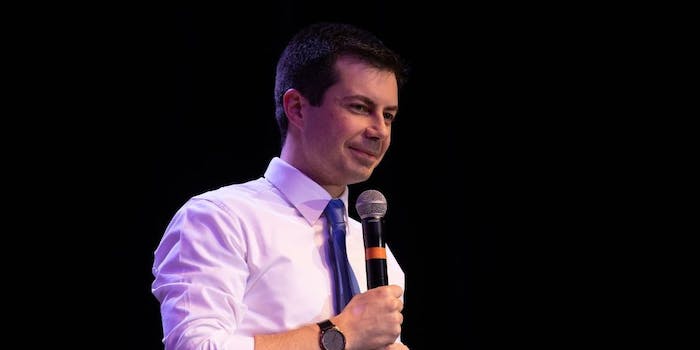 Yesterday, the New York Times editorial board published its interview with former South Bend Mayor Pete Buttigieg. The board has interviewed the Democratic presidential candidates to help it decide who to endorse (though some have theories about whether the endorsement is a foregone conclusion).

Its questions for Buttigieg ranged from extremely meaty to more like a condiment or dressing, if you will.

One of the more robust questions was about reports that a grocery chain he did consulting work for while employed at McKinsey engaged in illegal bread price-fixing. An internet theory is that Buttigieg, who was tasked with building a database to help the company cut prices without sacrificing profits, was part of the price-fixing scandal, which he categorically denied, telling the Times that he didn’t even know about the scandal until the night before the interview.

“So the proposition that I’ve been on front lines of corporate price-fixing is bullshit,” he actually said. “Just to get that out of the way.”

(When reports emerged last month that Buttigieg’s work for the chain, Loblaw, overlapped that of the price-fixing, the company publicly stated that he had nothing to do with it, according to CNN’s Dan Merica.)

Nevertheless, it didn’t take long for that portion of the interview to get resoundingly mocked and memed.

“Pete Buttigieg is now the 6th iteration of the system of control and they are becoming exceedingly efficient at it,” said @rbe_expert on The Matrix thread. “Ok but Pete is more Mr. Anderson than Neo,” @vicvaiana added.

Pete as neo when Anderson takes his mouth away pic.twitter.com/pQzzvKowRW

“Look all I did was put together the numbers that showed it would be much cheaper to blow up Alderaan than continue to occupy its surface,” @illnessideology quipped on the latter. “Also this has a strong anti-Sith connotation and you are impinging my religious freedom,” said @SeanRLoftus. “Who is being intolerant now.”

NYT ED BOARD: So you blew up Alderaan-
DARTH VADER: Whoa, that is complete <expletive>. I worked for a *consulting company* that *recommended* blowing up Alderaan to a *client*, which then apparently did blow up Alderaan. I guess. I hadn’t even heard of that until two days ago.

Whoa whoa whoa. Who's saying that? You're saying that. I'm not saying that. I was an analyst on the Death Star. I would push a button sometimes and maybe planets would blow up and maybe they wouldn't. This is <expletive>.

Do we need more female Grand Moffs? Of course! More Tie Fighter pilots of color/species? Yes please. But we can accomplish this using existing Pell Grants, with programs that reward applicants who start & run a Cantina on an under served system and run it successfully for 3 years

The Times will announce who receives its endorsement in the Democratic primary on Sunday.