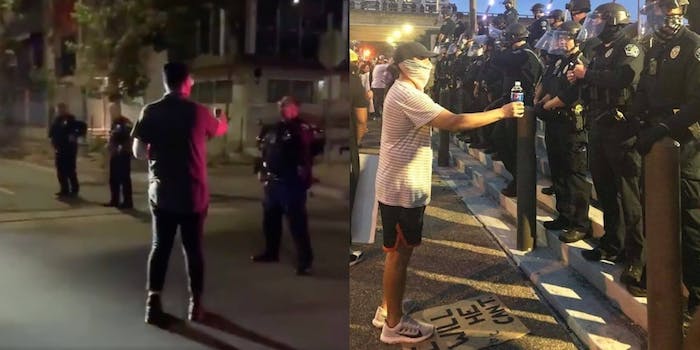 ‘But it helped in the commercial’: Protester tries to give Pepsi to police

As it turns out, offering cops a Pepsi isn’t as unifying as Kendall Jenner made it out to be.

The ad was so heavily criticized for trivializing the Black Lives Matter Movement that Pepsi pulled it after one day and issued an apology.

The overly happy commercial was basically Coachella if Coachella was a blue-saturated protest. In it, people are dancing, holding up signs calling for peace and “conversation” and generally having a good time. The video wraps up with Jenner offering a can of Pepsi to a police officer who accepts it with a smile. Jenner walks back to the crowd of protesters triumphant and the crowd rejoices.

*Record scratch, freeze frame* Reader, this isn’t how it went when protesters tried the same thing this week.

Protesters who tried the bit approached officers wearing full-on riot gear, not a standard uniform and baseball caps like in the commercial. Behind them, signs spelled out the names of Black men and women killed by police and asked for tangible action, not just peace and conversation.

Comedian Everett Byram was the first person to go viral for the stunt, according to New York Post.

“Hey, you guys, like a Kardashian over here, hey, look, it’s a Pepsi, want Pepsi? Have it!” Byram said, approaching police with a Pepsi. “Have a Pepsi, dude!”

The officer told Byram he appreciates the officer but that he has to back up.

“But it helped in the commercial,” Byram said while walking back and making obvious sounds of frustration.

The next day, a Twitter user posted a photo of someone else making the same attempt with the caption, “I can’t believe someone actually did it.

Jenner hasn’t responded directly to the people trolling her ad but is among the slew of celebrities blasted for their performative activism and action-less posts.

Earlier this week, Jenner wrote in an Instagram post that she’s “been doing a lot of thinking these past few days and my heart has been so heavy.”

“I will never personally understand the fear and pain that the black community go through on a daily basis, but i know that nobody should have to live in constant fear. I acknowledge my white privilege and promise I will continue to educate myself on how I can help.”