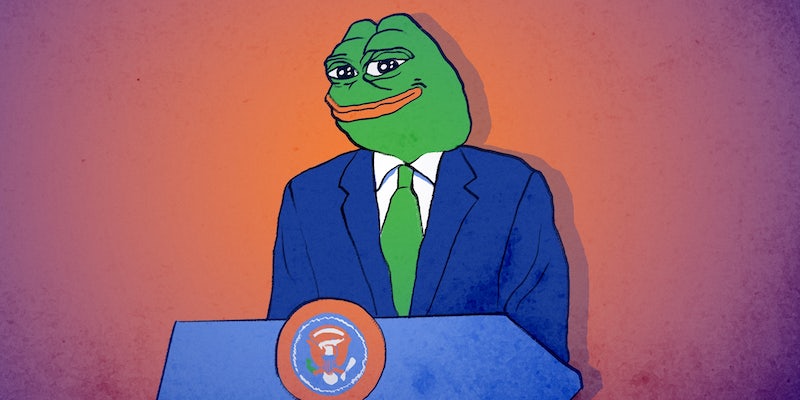 Don't blame me, I voted for Dat Boi.

Pepe Le Frog was born in 2005. His father, Matt Furie, was but a humble cartoonist; however, through hard work, dedication, and an unwavering commitment to dankness, Pepe soon became one of the internet’s spiciest memes.

For Pepe, it felt good, man. It felt really good. But, as Pepe was taught as a young child, with great memeness comes great responsibility. Pepe felt the pull of public service and was drafted into the alt-right, becoming a de facto part of Donald Trump‘s presidential campaign.

Yet, Pepe was unsatisfied. If a former reality TV star could mount a credible run for the Oval Office, why couldn’t an internet-famous anthropomorphic frog? There’s nothing in the Constitution explicitly saying a meme can’t be president, right?

So, papers were filed with the Federal Election Commission officially declaring the candidacy of Pepe Le Frog for president of these United States as a member of Le Meme Party.

That’s when the FEC decided to bring the meme party to an end.

You may be wondering how Pepe got into this situation.

As the Center for Public Integrity reports, late last month, the FEC sent a letter to Pepe—or, more accurately, the San Francisco-based memester who filed candidacy papers in Pepe’s name—demanding verification about whether the green cartoon frog actually exists.

“It has come to the attention of the Federal Election Commission that you make have failed to include an accurate name of the candidate and an accurate principal campaign committee,” the letter read. “Furthermore, the Commission requires the filing to be true, correct, and complete. … Additionally, knowingly and willingly making any materially false, fictitious or fraudulent statement or representation to a federal government agency … is punishable [by law].”

Pepe is far from alone in drawing the FEC’s ire. That letter was part of a batch of over 200 similar notices sent to the people behind joke candidates ranging from H. Majesty Satan Lord Of The Underworld Prince Of Darkness! to Mr. Ronald Reagan’s Ghost.

All of these suspicious candidates are being asked to provide additional documentation that they, in fact, exist, or else withdraw their candidacy filings. In a statement released last month, FEC officials explained that the agency “authorized staff to send verification letters to filers listing fictional characters, obscene language, sexual references, celebrities (where there is no indication that the named celebrity submitted the filing), animals, or similarly implausible entries as the name or contact information of the candidate or committee.”

The flood of formal registrations of imaginary candidates came in the wake of Deez Nuts, a sophomoric joke created by a literal high school sophomore named Brady Olsen. Nutz gained national attention after Olsen filed a declaration of candidacy last year. Olsen even went as far as creating a candidate website for Deez Nutz, complete with policy positions in favor of same-sex marriage and the Obama administration’s controversial nuclear deal with Iran.

In a recent survey, Deez Nuts was polling ahead of Green party candidate Dr. Jill Stein in Texas.

As USA Today notes, one reason behind the spike in joke candidates filing with the FEC is likely due to the agency putting its “statement of candidacy” form online, making the registration process significantly quicker and easier than it was previously.

Just because a presidential candidate files with FEC doesn’t necessarily mean his or her name will appear on any ballots. Each of the 50 states have their own rules for what candidates must do to have their names put before voters. These screening requirements generally do a good job of ensuring only real people are able to receive votes.

What’s interesting here is what, while the FEC is cracking down on irony-drenched jokesters, the agency has been widely criticized for ignoring major lapses in campaign finance rules.

In an interview with the New York Times last year, then-FEC Chairwoman Ann Ravel charged that the committee was so deadlocked along partisan lines that “the likelihood of the laws being enforced is slim. … I never want to give up, but I’m not under any illusions. People think the FEC is dysfunctional. It’s worse than dysfunctional.”

Paul Ryan, the deputy executive director of the Campaign Legal Center, explains that these letters to fake candidates fall well below the threshold for actually being considered enforcement actions by the FEC. The deadlock at the agency is happening at the level of the commissioners themselves, while these letters were sent by agency staffers. They didn’t require approval from the commissioners and, therefore, aren’t indicative of the agency once again taking up the mantle of policing violations of U.S. election law.

“This action by staff (without a Commission vote),” Ryan told the Daily Dot in an email, “doesn’t give me much hope that the Republican commissioners who’ve been blocking enforcement actions will now begin enforcing the law.”