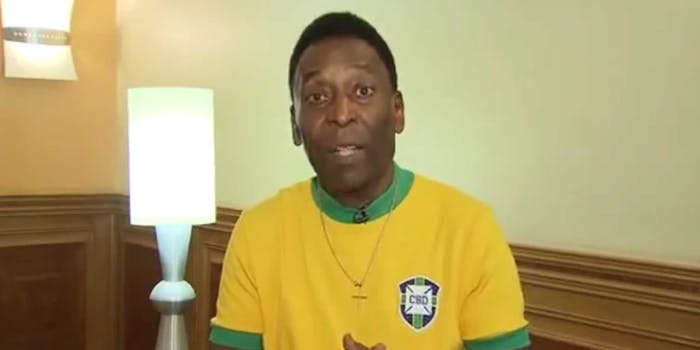 Brazilian icon Pelé has drawn online wrath after urging demonstrators via national television to leave the streets and instead cheer for the country's national squad.

Not even a soccer legend is impervious to the ire of social media.

Brazilian icon Pelé has drawn the online wrath of his fellow countrymen on Wednesday after urging demonstrators via national television to leave the streets and instead cheer for the country’s national squad.

“Let’s forget all this commotion happening in Brazil, all these protests, and let’s remember how the Brazilian team is our country and blood,” he said in his statement. Footage of his plea was also posted to YouTube.

The South American country is currently hosting the Confederations Cup, a dress rehearsal of a tournament held a year before the actual FIFA World Cup. The latter sporting event—scheduled to attract as many as 600,000 tourists worldwide—has been a sore point of contention with dissidents who feel that the nation’s government has spent billions on stadiums instead of more urgent needs, like hospitals and other public services.

Brazil saw its biggest demonstration in over 20 years Monday, when as many 200,000 protesters took to the streets nationwide. As previously reported, some of them were met with police resistance.

On Twitter, Brazilians have taken Pelé to task for his tone-deaf remarks. According to social analytics site Topsy, his name has been mentioned more than 14,000 times in the last 24 hours.

“Pelé is unattackable. The problem is when he turns EDSON,” Brazilian radio host Carlos Guimarães said, a reference to the footballer’s actual name (Edson Arantes do Nascimento)  “That EDSON is an ordinary human being. The problem is that his other identity is a myth.”

“I have two sorrows when it comes to Pelé, first because I never saw him play and secondly because I have to hear him talk,” wrote a Rio de Janeiro resident.

The backlash against a man responsible for three of Brazil’s five World Cup trophies has also made its way over to YouTube, where a video of Romario—yet another Brazilian football legend—criticizing Pelé has amassed close to 250,000 views since yesterday. In 2006, Romario made headlines after telling reporters that “a silent Pelé was a poet.”