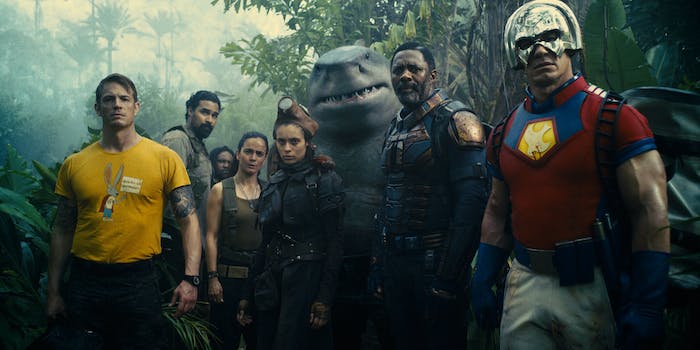 James Gunn's spin on the DC universe gets violent.

Superhero stories on the screen are having something of an existential crisis right now. That’s not necessarily a bad thing: When you spend years watching characters kick, punch, blast, lasso, and manipulate their way past whatever villain is in their way this time, it’s eventually going to take a physical and emotional toll. In the hands of the right actor and creative team, it can lead to rich storytelling, but more often than not, themes like grief and trauma have instead lent themselves to lazy shorthand.

Release Date: Aug. 6, 2021
Director: James Gunn
Streaming: HBO Max
Amanda Waller assembles a new team of villains and drops them onto a remote island to destroy a top-secret project that has the potential to wipe out much of the world. ‘The Suicide Squad’ leans on many of James Gunn’s superhero movie touchstones—baldy comedy, stylish action sequences, and plenty of needle-drops—for a fun romp that keeps you guessing.

On the other hand, James Gunn’s The Suicide Squad doesn’t try to adhere to that trend, nor does it pretend to be anything it’s not. It throws too many cooks into the kitchen and sits back to watch how many of them can kill each other. While it lags in the middle and some of its emotional beats don’t always work, the results are absurdly fun, stylish, and violent.

There are so many villains stacked in the Suicide Squad—or, to use the official name, Task Force X—that there are several dead bodies on the ground even before the opening credits roll, and the overall body count climbs from there. At one point later in the film, a character’s sacrifice for the mission is met with confusion by Harley Quinn (Margot Robbie) because she had no idea that this person was even traveling with them.

You don’t need to have seen Suicide Squad, the widely derided 2016 film that preceded Gunn’s version, to understand what’s going on. Apart from a few returning faces and an acknowledgment from the ruthless Amanda Waller (Viola Davis) that “you know the deal” when it comes to the squad’s setup, it doesn’t come into play. This time around, the Suicide Squad is sent to the fictional island of Corto Maltese and tasked with destroying any traces of Project Starfish, a top-secret project that goes back decades and now poses a threat after a military coup. Each member has a detonator placed in their neck that Waller can blow up if they abandon the mission, do something they’re not supposed to, or—if we’re being honest—say something to piss her off. If they succeed, Waller will shave off their prison sentences.

The vast crew is eclectic, and The Suicide Squad is interested in some of them more than others. Bloodsport (Idris Elba), under threat, is given a prominent position. Peacemaker’s (John Cena) quest for peace is so extreme that he’ll happily commit mass murder to obtain it. King Shark (performance captured by Steve Agee and voiced by Sylvester Stallone) is a lovable oaf with a hunkering for human flesh who has to learn that sometimes, people are friends, not food. Ratcatcher 2 (Daniela Melchior), who can control rats with a device, provides the heart alongside her own pet rat, Sebastian.

Savant (Michael Rooker) would rather just stay in his prison cell than go on a mission but jumps at the chance to cut that sentence down. Col. Rick Flag (Joel Kinnaman) and Captain Boomerang (Jai Courtney), the two other holdovers from the 2016 Suicide Squad, bring on brute force upfront. Polka-Dot Man (David Dastmalchian) comes in with a death wish—and he might not be the only one. And Weasel (Sean Gunn) is something of a monstrosity; not even his own squad knows what he is.

To destroy Project Starfish, the Suicide Squad has to evade the likes of Corto Maltese’s military, convince the Thinker (Peter Capaldi) to get them into the Nazi-era building where Project Starfish is being kept, rescue their own, and eventually, take down a giant, intergalactic starfish called Starro that can spit out smaller versions of itself that will latch onto people’s faces and feed off them. But more often than not, they’re getting in their own way or essentially conducting dick-measuring contests but with kills to see which of them is better than the other.

As for the loaded gun that is a plot involving largely Americans invading a country in Latin America, The Suicide Squad draws a comparison between its depiction and modern U.S. imperialism, but it only goes so far before having to swerve to the next scene. “I think liberty is just your excuse to do whatever you want,” Bloodsport snidely remarks of Peacemaker’s moral code; another character, who’s shown the aftermath of the squad’s brash methods, notes, “Typical Americans. Just run in, guns blazing.”

It’s apparent that Gunn is having fun. The film opens in media res, and after watching the carnage play out, we circle back to a few days prior. At one point, the film turns on its axis to reveal what one character had been doing while they were off-screen, and until its conclusion, feels almost like it’s a different movie. One fight, which involves Harley Quinn taking out several soldiers on her own, places you in her boots as visuals of butterflies and flowers spring out. And from its beginning, all the way to the end, Gunn and his crew find ways to depict the cosmic and the brutal violence in creative ways as it takes full advantage of The Suicide Squad’s R-rating. Without restrictions, the f-bombs fly, and, looping in Gunn’s stint as a Troma director early in his career to full effect, the bloodier, the better.

The Suicide Squad might not reinvent the wheel when it comes to superhero movies; despite the body count of who dies, the overall plot structure is familiar. But by embracing the full-on gonzo and gory potential that letting the Suicide Squad loose, it’s also one of the more entertaining films you’ll see this summer.

The Suicide Squad is now in theaters and streaming on HBO Max until Sept. 5.