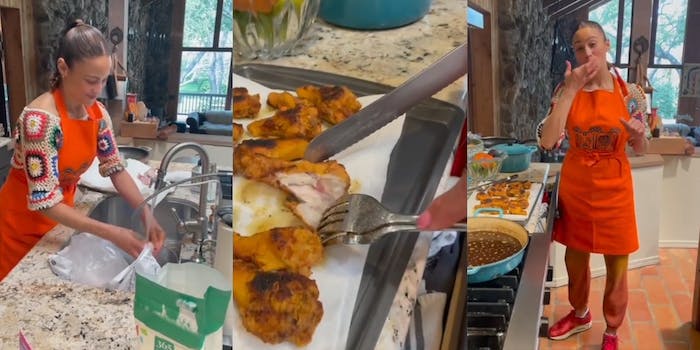 Spencer posted a two-minute duet with Patton’s video, expressing amusement and disbelief about the way Patton washes her chicken (briefly in cold water, in the sink), and then fails to season it. Basically, Patton starts out by flouring the chicken, and only seasons it after putting it in the pan of hot oil. “You’re seasoning grease!” Spencer exclaims.

The TikTok was viewed more than 700 times in one day and is quickly spreading on Twitter as well, as viewers poke fun at Patton’s recipe and argue about the best way to wash chicken.

The comments section is full of replies like, “IM SCREAMING WHY IS SHE SEASONING THE GREASE” and “I cried so hard IN THE GREASE Paula???” along with comments about the fact that Patton’s mom is white. This TikTok also reawakened the perennial debate about washing uncooked chicken, because while many people were taught to do this, it’s not recommended by the USDA. If one washes raw meat in the sink, they run the risk of splashing bacteria onto kitchen surfaces.

Meanwhile, Patton’s name is trending on Twitter as people express horror at the chicken recipe, comparing it to a recent episode of Atlanta in which a white family served microwaved “healthy” chicken in a legendarily unappetizing manner.

As for Patton herself, she hasn’t responded to the attention. Her original fried chicken video has over 100,000 views on Instagram (far, far more than her typical posts) but the comments have been deactivated. One can make an educated guess as to why.

The Daily Dot has reached out to Ashley Spencer via TikTok comment.