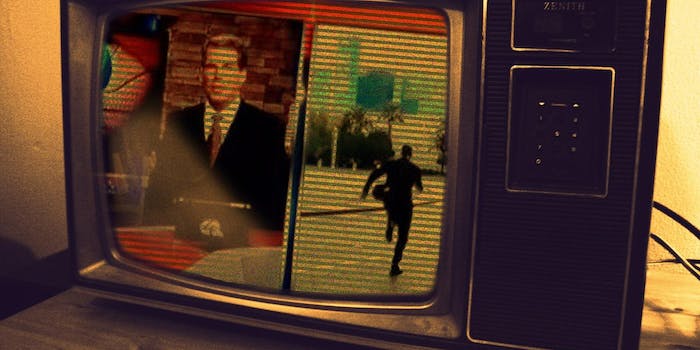 Cicala is the local sports anchor for local Tucson station KVAO. With his pre-game interivew running a little late, he decided to axe it on air so that he could arrive on-time for the tip-off.

Nothing was going to stop from punctually reporting on the game for you, the viewers at home. That’s when Cicala spun around and barreled across the parking lot like an out-of-shape Flash Gordon.

And then his rapidly pounding feet met an unsympathetic curb.

They don’t teach you that in journalism school.

Cicala came out of his encounter with MGM Grand parking lot mostly unscathed. He tweeted throughout the game, even finding time to post a selfie during a timeout.

View (selfie) from press row during time out with 3:57 to play & AZ leading 68-66 vs UCLA in Pac-13 Title Game @KVOA pic.twitter.com/TTOomcjHCI

Photo by reid/flickr (cc by 2.0) | Remix by Fernando Alfonso III