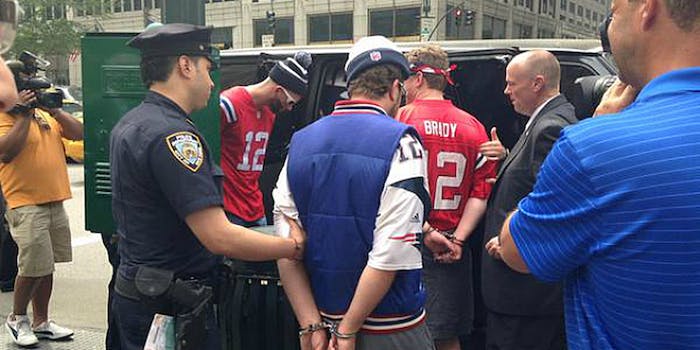 Patriots fans arrested at NFL offices after staging a sit-in

It looks like we’ve found the kind of people who are willing to donate to a GoFundMe page to defray the cost of a $1 million fine that the New England Patriots have to pay for the #DeflateGate scandal.

Actually, these guys are a bit more extreme than giving $10 to a totally stupid cause. These guys are willing to get arrested for Patriots quarterback Tom Brady.

After Brady was suspended Monday for the first four games of the 2015 season for his role in the scandal—the Ted Wells report said it was more probable than not that one of the greatest quarterbacks in league history and a four-time Super Bowl champion was part of a conspiracy to illegally deflate footballs — four Patriots supporters infiltrated the NFL offices in New York to protest the punishment.

As they were being arrested and led out of the Manhattan offices, this is what they said.

In case you missed it, the guys said either, “Free Brady” or “I’d die for Brady; I’d die for [coach Bill] Belichick” or “This is the best day of my life, being arrested for Tom Brady.” Hey, it’s (somewhat) funny stuff, because clearly, they’re not being serious.

Here’s how the protest began.

And how it continued.

Patriots protesters have handcuffed themselves together in lobby of @NFL offices. Expecting police arrival. pic.twitter.com/Tc5ah9XkyK

And here’s what happened when building security got involved.

Which leads us all to the stunning conclusion. Here’s the apparent ringleader of the sit-down protest.

I don't want to beg but a gofundme for our bail would be nice. #defendthewall #freebrady