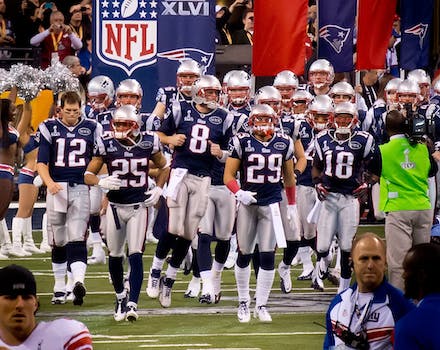 It isn't the first time the Patriots have been accused of cheating.

The NFL is looking into the possibility that the New England Patriots deflated footballs in Sunday night’s landslide, 45-7 victory in the AFC Championship against the Indianapolis Colts that launched Tom Brady to his record sixth Super Bowl.

WTHR’s Bob Kravitz was the first to report on the potential investigation, and although deflated balls probably can’t account for the one-sided box score, it could have impacted the game. And although the Patriots win won’t be rescinded, Kravitz revealed what it could cost them if they’re found guilty.

Breaking: A league source tells me the NFL is investigating the possibility the Patriots deflated footballs Sunday night. More to come.

I'm told at one point the officials took a ball out of play and weighed it. Should hear more tomorrow on this subject.

According to NBC Sports reporter Mike Florio, a source revealed that several balls were removed from play during the game due to under-inflation.

While Kravitz, a reporter based in Indianapolis, got attacked on Twitter by Patriots fans for posting about the report after the game, Newsday’s Bob Glauber later confirmed earlier reports of the NFL’s investigation. And the loss in draft picks isn’t the only thing the Patriots could lose.

NFL spokesman Michael Signora confirms the NFL is looking into whether footballs were properly inflated in Patriots-Colts game.

So will pats fans please get off my butt? Nfl has confirmed the story. More to come.

I can't think of a more beautiful way to wake up and enjoy my coffee and breakfast! God is GREAT! ~ #DeflateGate pic.twitter.com/F9h35H7V9V

One day, the Patriots will win a game and the opponent won't accuse them of cheating. One day. Actually, probably not.

If there's one thing the Patriots do well, it's cheating when they probably don't even need to. #DeflateGate pic.twitter.com/HyZLohD5Xc

The moral of the story here kids is …. "WATCH YOUR BALLS" around the @Patriots #DeflateGate #NFL pic.twitter.com/yFSCyikQLH

For Patriots haters, this is 2007 all over again. That’s when the Patriots were caught taping the hand signals made by the New York Jets’s defensive coaches, something Patriots head coach Bill Belichick admitted to doing since appointed to the position in 2000. Called Spygate, Belichick was fined $500,000, the team was fined $250,000, the league made Belichick destroy all of his tapes and notes, and the team lost its first round selection in the 2008 draft. Some fans still haven’t let the Patriots forget that, even though there’s no evidence that the tapes helped the Patriots win three Super Bowls since Belichick took the job.

For Patriots fans it’s the same old thing, and they’re left to defend their team yet again to the rest of the NFL, not just the Colts fans.

Some fans have their doubts, though.

How could the Patriots "illegally deflate" footballs when the referees–not Patriots–test and ceritify those footballs? Sounds farfetched.

Told you people 2 weeks ago the Spy Gate Truthers were never going away. #DeflateGate will fuel their hate and envy for another 50 years.

Brady, for one, wasn’t aware of the controversy prior to being told about it on WEEI’s Dennis and Callahan Show, but he didn’t find it surprising.

“I think I’ve heard it all [now],” he said after laughing. “Oh, God. It’s ridiculous…that’s the last of my worries. I don’t even respond to stuff like this.”

He’ll probably be focusing more on the same thing as the rest of the Patriots and the entire Seahawks team are: preparing for the Super Bowl.