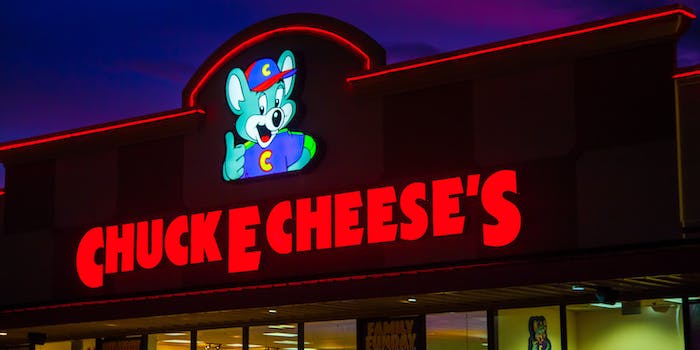 Chuck E. Cheese is open for business. Well, kinda. The once prime spot for children’s birthday parties is taking GrubHub delivery orders under a new name, Pasqually’s Pizza & Wings, and the move is prompting pizza memes.

With no mention of its connection on Pasqually’s GrubHub page or Chuck E. Cheese website, people were ordering from the restaurant thinking they were supporting a local business.

After it arrived, they realized their mistake. One Reddit user shared a conversation with their delivery driver where they both expressed confusion over the pizza origin.

“There was a Chuck E. Cheese store but the windows had the wing restaurant on them???” the driver texted.

Pasqually P. Pieplate, is, in fact, the chef character of Chuck E. Cheese. His restaurant is operating in the same kitchen as Chuck’s, which is also filling delivery orders through its website, according to a spokesperson who talked to Food & Wine. The spokesperson also said Pasqually’s pizza has a thicker crust and is more flavorful.

But the internet isn’t having it.

Some people are loving the quarantine entertainment.

“I think this is nominated as the funniest part of this pandemic,” one person wrote.

On r/actualconspiracies, people are split.

“And if their pizza didn’t suck they wouldn’t need to pretend to be something they aren’t,” user PoopIsAlwaysSunny wrote. “This is immoral behavior and they should be fined every dollar they made during this time period.”

Others are just calling it pathetic.

When people started searching for Pasqually, they also found the backstory between him and the mouse and were a little… confused about their feelings.

Others just want a film.

“Chuck E. Cheese is an orphan mouse with no birthday,” one user wrote. “Imagine what Pixar could’ve done with that premise.”

At the end of the day, some people are just glad the mouse is alive.

Chuck seems to be grateful for all of the attention and thanked @IsabellaMorg on Twitter for posting his backstory.

According to the restaurant’s page, the company is still taking safety precautions and not reopening stores yet.

“I ate a piece of Chuck E Cheese pizza a year ago and it still tastes like burning vomit,” ragingprostate wrote.