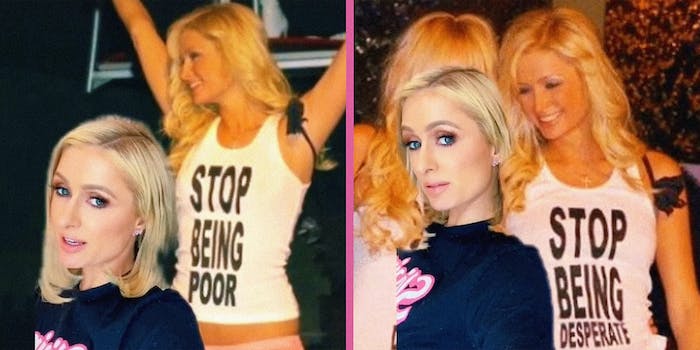 Paris Hilton reveals that ‘Stop Being Poor’ shirt was fake

'Everyone thinks it's real.'

Paris Hilton is using TikTok to set the record straight on a now-iconic image of her.

On Monday, Hilton addressed a famous photo of her, in which she’s wearing a white tank top that says, “Stop Being Poor.”

“I never wore that shirt,” Hilton says in front of a greenscreen of the 2005 photo. “This was completely photoshopped. Everyone thinks it’s real.”

The shirt actually said, “Stop Being Desperate,” and Hilton showed another photo of her and sister Nicky wearing the matching tees. There are several photos of her in the real shirt, taken in 2005 at the Palms Hotel in Las Vegas.

Know Your Meme points to a 2013 Tumblr post as a possible origin of the photoshopped image, and the shirt has been debunked since then, but the meme (and the ideology behind “Stop being poor”) has persisted. Depop and Amazon both sell versions of the fake shirt.

Commenters were a bit shocked at the revelation, though multiple people claimed the shirt is still “iconic” and even “inspirational.”