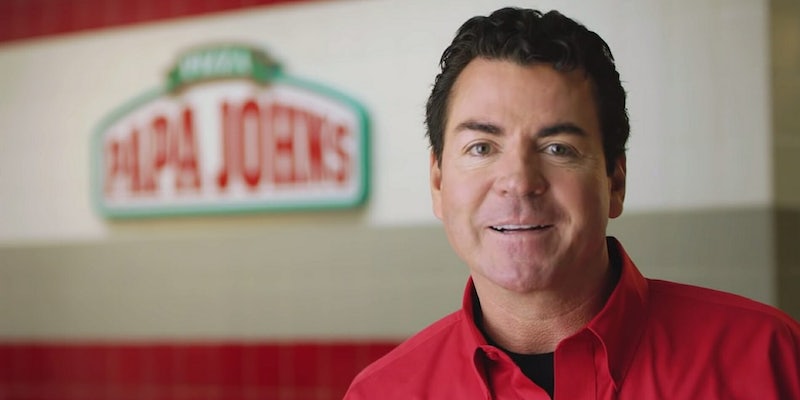 The Papa is stepping down, sort of.

Papa John’s founder John Schnatter won’t be leading his pizza company for long. After making some questionable remarks about the NFL’s response to ongoing protests against racism and police brutality, Papa John’s announced on Thursday that Schnatter will be stepping down as CEO, with President and Chief Operating Officer Steve Ritchie replacing him in the role.

Ritchie will take on the CEO position starting Jan. 1, 2018, letting Schnatter continue as CEO throughout the rest of the holiday season. Schnatter will also remain as chairman of the board for the pizza franchise, and he will continue to be its biggest shareholder, too. In a press release from Business Wire, Schnatter gave high praises to Ritchie, arguing that he has the experience and drive necessary to help Papa John’s grow as a business.

“I am so proud of Steve—he has excelled at every job he’s ever held at Papa John’s—from being an hourly customer service rep, to a delivery driver, store general manager, director of operations, franchisee and most recently President,” Schnatter said in an official statement through Business Wire. “We couldn’t have a more proven leader to guide Papa John’s through its next stage of growth.”

Ritchie will control the company amid concern over Papa John’s slumping sales during 2017’s third financial quarter, causing the franchise’s stock to drop. Originally, Schnatter placed blame on the NFL’s leadership for the decline in sales, with the league coming up in conversation over 40 times during a financial conference call, according to Bloomberg.

“The NFL has hurt us by not resolving the current debacle to the players’ and owners’ satisfaction,” Schnatter said. “NFL leadership has hurt Papa John’s shareholders.”

On Twitter, many users were surprised to see the Papa go.

Others think the pizza really isn’t that great.

Papa John's pizza is trash because it looks like this pic.twitter.com/pzVMjY7fFC

And some wonder who will be the new Papa.

[walks into a Papa John's] I'm your papa now

Most of all, many are continuing to boycott Papa John’s after Schnatter blamed the NFL protests for the pizza’s decline in sales.

Papa John is stepping down as CEO of Papa John's, after nazis called them "the official pizza of white supremacy". It's too bad it doesn't work like that for presidents of the United States.

Papa John’s press release does not specifically mention the NFL as a contributing factor to Schnatter’s resignation, although his comments continue to haunt the pizza business weeks later. Shortly after Schnatter complained about the NFL, the “alt-right,” a collection of conservatives who harbor white supremacists, took an interest in supporting Papa John’s, causing the pizza company to condemn its neo-Nazi customers on two separate occasions.

But Schnatter may have more in common with them than he cares to admit. He previously donated $1,000 to President Donald Trump’s election campaign, suggesting on some level that he at least agreed with the president’s campaign.