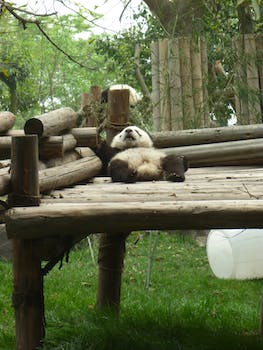 The panda's greatest survival tactic is its cuteness.

People love pandas because there’s something unbearably cute about creatures that cannot survive without our benevolent intervention, like dachshunds and corgis and Gary Busey. There is indeed ample evidence that pandas took the wrong branch on the tree of evolution a very long time ago: Their unwillingness to copulate; their diet of only bamboo; their rudimentary earthquake escaping abilities.

We have new video evidence of the latter problem, after the earthquake in China’s Sichuan province last week.

Watch as a ball of cute comes joyfully barrelling down a slope, then panics as the entire forest suddenly begins to shake violently. To the trees! he thinks confidently, forgetting for a moment that he is, in fact, just a freakin’ panda.