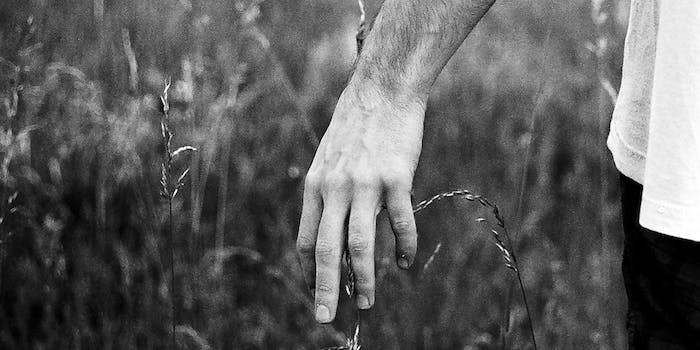 Anyone who dares to silence us? I’m gonna to need for them to bow down.

My name is Derrick. And I’m a sexual violence survivor.

It’s taken me more than 10 years since first being sexually assaulted to speak or write those words without shame. Not for a lack of trying, though. Whenever my upper lip quivered, a breath away from tearfully sharing my pain with someone else, I chose to remain silent. I didn’t want to burden anyone with my painful reality. More often than not, others shushed me instead, starting with that first guy. Silence isn’t as golden as it may seem.

So while I read Pamela Anderson’s speech from her natural welfare foundation launch last Saturday, where she shared her multiple brushes with sexual violence, all I could do was cry. Anderson said she’d gotten to a point in her journey where she felt it might be time to reveal some of her most painful memories: being molested by a babysitter, raped by a friend’s brother as a child, and gang-raped by a boyfriend and his friends in ninth grade. But events during her quest to survive fostered a personal connection with animals.

“Needless to say, I had a hard time trusting humans. I just wanted off this earth,” she said during the launch event at the Cannes Film Festival. “I vowed to protect [the animal kingdom] and only them. I prayed to the whales with my feet in the ocean. My only real friends, till I had children.”

For me, my pen and pad, laptop and a quiet place in my home—my writing process, if you will—have all been my therapy during these years of silence. No one can violate me while I’m alone, writing, working, and creating a space for my own liberation (and perhaps also helping others along their own journey). And in that spirit, I’m sharing my story, too.

What should’ve been a typical restroom break from an Algebra class ended up being my first experience with an attempted rape, as a teenager. A male classmate and acquaintance of mine encountered me as I wiggled out the last few drops of urine at an unlocked stall, just a flip and a zip away from finishing the job and washing my hands. That’s until I was interrupted by an abrupt clasp on my wrist and a swift, weighty push into the bathroom’s caulked, yellow brick walls. He whispered, “I want you, and if you don’t let me have it, I will take it, and you better not say a word.”

He was similar in stature to my adolescent self: 6′ 1”, about 190 pounds, broad shoulders, big hands, and flat, mammoth-like feet. In knowing him, I never once thought he would attack me. But then he exposed from his navy blue trousers what lingers in my mind as hard, thick, roughly eight-inch knife, pointed in my direction like a weapon.

“This is really happening,” I told myself. So I did as older male relatives taught me to do whenever someone put their hands on me: I fought back. I got away. And, with a sense of urgency, I composed myself and headed back into the classroom as if it never happened.

He became one in a number of men who would violate me, verbally and physically. Like the guys who followed me home for three blocks in broad daylight, unable to suppress or filter their thoughts about wanting to “plow my big, tasty ass so hard.” Or the creep in a crowded Boystown bar who grabbed and fingered my butt from behind and apologized while displaying the picture he snapped of it on his iPhone. “I’m sorry, it just looked so good,” he said, as I expressed stern disapproval. There’s the church leader who couldn’t take no for an answer and forced himself onto me. And even the job interviewer who wouldn’t hire me because I turned down his advances.

I often asked myself, in a blaming way, “Why am I such an appealing target for men who can’t respect my body and my boundaries?” But it meant everything to recently hear friends tell me what my soul longed to hear: “What happened to you was not your fault.” I now realize it was never about me. It’s about a cultural inability to discuss and express our sexuality in ways that affirm pleasure rather than painful coercion—including attempts at silencing conversations about sexual assault.

I was told to keep quiet by that classmate of mine, and I obeyed. Not because he said so, but because I feared being judged or blamed for what I’d gone through. I’ve tried, slowly but surely, over the past year to break through that fear of speaking up; to shun respectability politics that muzzle discussions about healthy sexuality and to affirm my individual agency. Until recently, I held back, rationalizing it away or putting it off with “now isn’t the right time.” Pam did the same with her mother for years, she said, keeping it to herself to avoid any upset.

I thought my silence would keep me safe. But, in the words of Audre Lorde, “When we speak, we are afraid our words will not be heard or welcomed. But when we are silent, we are still afraid. So it is better to speak.”

I realize it’s not always possible for survivors like me to speak. Maybe we’re just not emotionally ready. Maybe we’re afraid of retaliation from those who abused us, if they find out we spoke out. Maybe we don’t want to read comments online that say “they wanted it,” as was the case with most media coverage of Anderson’s disclosure last weekend.

But I’m finally able to raise my voice anyway, and put my feelings into words, rebounding after a professor discouraged me from doing so in a writing class some months back. He didn’t hurt me with his hands, as other men did, but with his words that minimized my experiences, comparing what I’d endured to a child afraid to confront schoolyard bullies.

When I think of men like him, and others, who shut out survivors from speaking our truths, I’m tempted to crank up Beyonce’s empowerment anthem, “Flawless.” Because I can be a whole, healthy sexual being, and no person’s violation of that energy will ever take it away from me—not anymore. By writing and speaking out, even after all these years, I’m near what I feel is the end of a personal journey to reclaim full ownership of my sexuality, releasing those voices and actions curbing it for so long.

That’s what Pam Anderson taught me, as well as other survivors who have embraced me this past week. And for anyone who dares to silence us? I’m gonna to need for them to bow down.