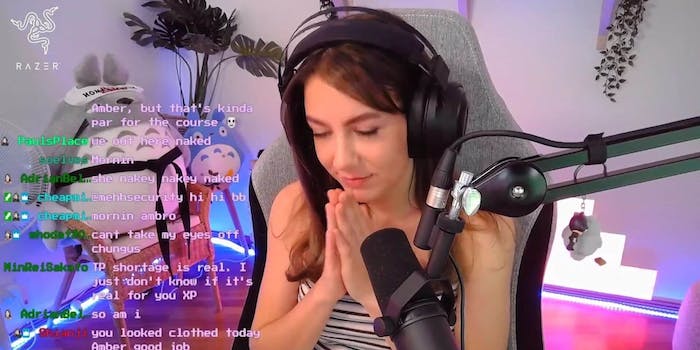 'Dude, I wish I was joking when I said there is no toilet paper.'

As the number of coronavirus cases continues to increase, much of the rest of the world is panicked. And they’re buying up all the toilet paper. It’s become such a problem, at least in the mind of Twitch star PaladinAmber, that she said she’s giving out her post office box number so people can send her some.

PaladinAmber, the Australian streamer whose real name is Amber Wadham and who has about 75,000 Twitch followers, explained to her viewers on Sunday that the country’s stores are rationing toilet paper because people are so desperate to buy large quantities of it.

So, she took drastic action during her broadcast.

“Guys, everyone, I’m about to do something I’ve never done before,” she said. “I’m giving out my post box. I’ll tell you why. I need toilet paper.”

Australia has suffered three deaths from coronavirus, and at one Woolworth’s store, shoppers can only purchase one package of toilet paper at a time.

“We’re talking about a virus which is a biological contagion, but what’s happening [as a result] is social contagion where you sort of catch what other people are doing,” Jill Klein, a marketing professor at Melbourne Business School, told Al Jazeera. “When you’re in the grocery store, and you see people with carts full of toilet paper, you think ‘I better get some toilet paper.’ And when the shelves are empty, people think, ‘Oh my gosh, there’s no more toilet paper in Australia.’”

It’s gotten so bad that two women in Sydney were recorded physically fighting each other for toilet paper at a local grocery store.

Wadham laughed off that incident, but when one of the people in her Twitch chat said they know someone who had bought $600 worth of toilet paper, that bit of knowledge set her off.