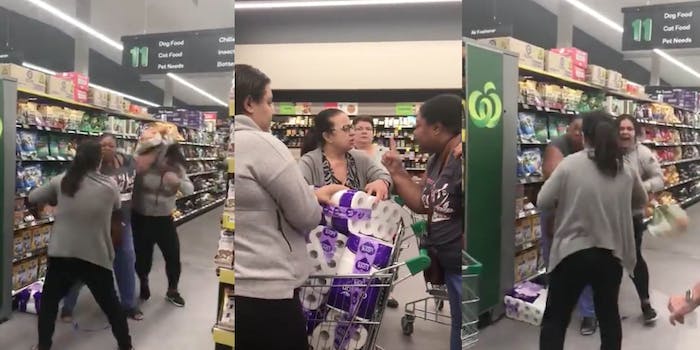 The women have since been charged.

On Saturday, two women from Sydney, Australia, were charged after they were caught in a viral video fighting over toilet paper at a local grocery store.

“Score another reason to buy online and not enter a store for #toiletpaper,” Twitter user @svsfo wrote, along with the video. The 51-second-long clip has racked up over 4 million views on social media and has been featured on newscasts around the world.

It begins with the three women entangled in a physical altercation before it simmers down into a verbal argument.

Two of the women appear to be mother and daughter and can be seen with a shopping cart stacked high with toilet paper packs.

“I just want one pack,” the other woman is heard saying to the hoarding duo.

The mother then holds on to the cart adamantly and denies the simple request.

“No, not one pack,” the mother of the woman responds, shielding her cart.

Eventually, a man who appears to be an employee steps in and takes the cart. The video ends with him pulling out his phone.

According to ABC, police were called, and the women were taken to the police station and issued court attendance notices.

Both BBC and CNN have reported on customer stockpiling as fear of the coronavirus (COVID-19) continues to spread globally. Photos and videos have circulated that shows overcrowding and long lines in grocery stores. Photos of shelves empty of sanitizers at stores like Costco, Walmart, CVS, and Walgreens are also being shared online.

Amid the worldwide concern, many on Twitter still could not believe that the coronavirus panic has gotten to this ridiculous level and shared their bewilderment in the usual meme and GIF fashion.

Others just could not fathom why toilet paper has become the choice item of demand in Australia.

“Corona makes ya poop! Narrator: No it doesn’t,” one user tweeted.

But one “embarrassed” Australian, Twitter user @wf66, summed up the irony of the situation best.

“OMG I feel embarrassed to be an Australian. Fighting over Toilet Paper. Stupid! The funny thing is they are panic buying Toilet Paper due to the Coronavirus and yet get into a physical altercation and who says the person they are fighting isn’t infected with that virus already?” wf66 tweeted.