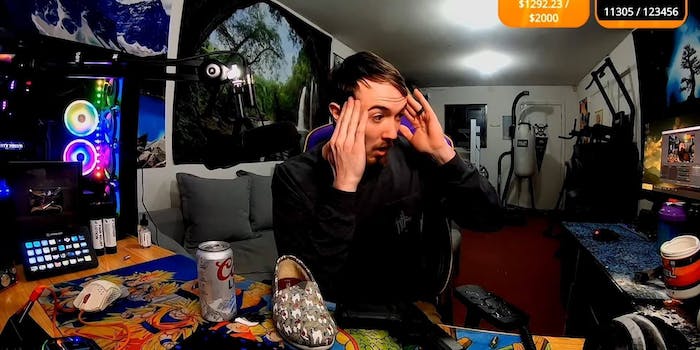 Twitch streamer SoaRCarl has been suspended from Twitch and has been removed from his esports organization’s roster after he accidentally fired a gun while broadcasting himself. Now, he’s apologizing for his drunken stupidity and saying he deserves whatever punishment he has to endure.

In this clip, SoarCarl, a professional Call of Duty player whose real name is Carl Riemer, is gaming with a can of Coors Light in front of him when he picks up the weapon. Riemer leaned into the microphone and said, “Bitch, say I ain’t got money. Say I ain’t got money.” He pointed the gun to his left and fired. A clearly surprised Riemer then said, “Goddamn. What the fuck? I swear to God I just emptied the mag.”

In a YouTube video titled, “I got suspended from Twitch, don’t do what I did,” Riemer said he possibly ruined the rest of his life and years of hard work. “I was being stupid on my stream, as I normally am,” he said. “I was clearly intoxicated. But the fact of the matter is whether I was sober or intoxicated, guns are not a toy. They are not meant to be messed with…. I made such a stupid, stupid, stupid mistake.”

SoaR Gaming responded by suspending him from its roster indefinitely, writing on Twitter, “We do not condone the actions on livestream by Carl last night.”

Riemer said he uses the gun for self-protection, but for some reason on his stream, he picked up the weapon without double-checking the magazine and accidentally discharged it. He said the bullet went through a cup and broke his $1,000 monitor.

Now, his Twitch channel, where more than 108,000 people follow him (he has more than 850,000 subscribers on YouTube), has been suspended, and Riemer said the streaming platform and the money he makes from it is the reason he and his fiancé could eat and the reason they could buy a house. Now, he’s worried he’s thrown it all away.

“All can say is that I’m sorry and I deserve everything, every bit of backlash,” he said. “It was a stupid mistake, but it’s a stupid mistake that could have cost somebody their life. I’m so broken about this. It was so easily avoidable … I just threw it away last night.”