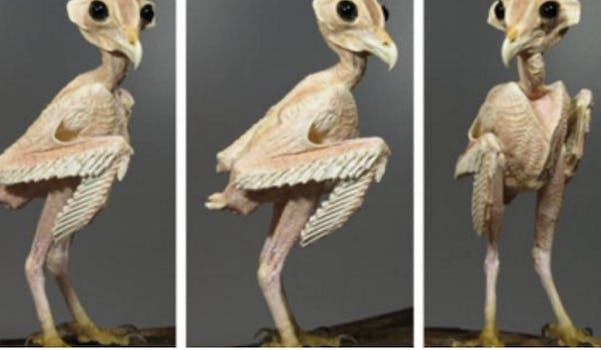 They are very displeasing to the eye.

You can always count on people on the internet to lose their minds at something that isn’t all that insane.

Much like how you look better in business casual instead of in your pajamas, of course an owl is going to look inexplicably odd without its feathers.

More so, an owl can turn its head around 360 degrees. You’re darn right they’re going to have some idiosyncratic-looking skeletal and muscular systems to accommodate that.

But enough caveats. On to the demon spawn, tweeted by @DanaSchwartzzz.

I just googled what owls look like without feathers and I am severely shook pic.twitter.com/B12IJ1atYl

kill it with fire

Twitter users also responded in kind with pictures of all sorts of animals without fur, which, surprise, look kinda weird, but not all that weird when you think about it.

You’ve got your bears.

bears without fur take the cake though pic.twitter.com/nkfSxv2sPS

Bald hedgehogs are testicles with a face pic.twitter.com/v7VNUdHu9W

Opossums probably aren’t going to get invited to any parties.

— seeing a flicker of fire brisked by a dusty wind (@DarkandWondrous) January 9, 2017

But none of those have anything on cats without fur.

(And also a fantastic Tumblr just in case you forgot the joke.)