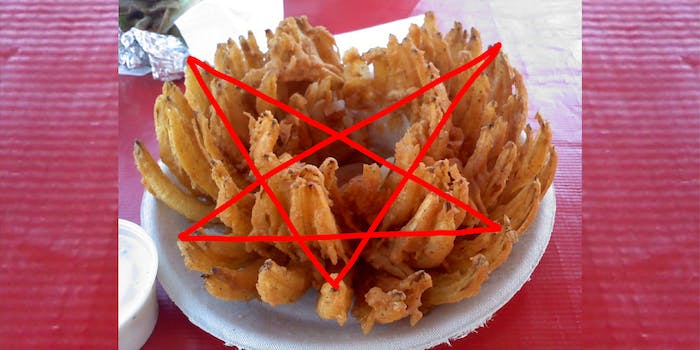 Are Bloomin’ Onions a tool of the Illuminati? No, says Outback Steakhouse

Is Outback Steakhouse part of the occult?

Think about it. Put it all together.

You’re not thinking about it.

So think about it harder. Are Outback Steakhouse locations placed around cities in America in a layout that, when traced, form pentagrams? Is that the key to proving the Virgin Mary is still alive? Or that Hillary really won the Electoral College?

The answer to that, according to a Twitter user, is unambiguously yes.

Those are Outbacks in New Jersey; Scottsdale, Arizona; Indianapolis; and Decatur, Georgia. They all form pentagrams. But it doesn’t matter the town. They are everywhere. Silicon Valley.

you could've done this though pic.twitter.com/J8kQluhuxG

Y’all may be on to something pic.twitter.com/fXEsSXR5G3

What does all this portend? That smart, forward-thinking brands tend to equally space out restaurants around large population centers?? Or are they secretly plotting our impending doom by arranging their chain outposts in such a way that… don’t make me spell it out for you, dude. They’re already reading this. They’re already here. The call is coming from inside the Bloomin’ Onion dipping sauce. (It’s a really small phone.)

On Twitter, the brand tried to play down the accusations by claiming they owned a giant Bloomin’ Onion capable of defeating us all.

That’s a Bloomin’ Onion stretching from Clearwater, Florida to Mulberry. Is it real? Probably. When’s the last time you spoke with someone from the Tampa area? Years? That’s because they’ve been enslaved this whole time building a deep fryer that stretches from the Gulf to the Atlantic. Is that why all these crazy stories have been coming out of Florida all these years? Because the state has secretly been a slave labor camp for Outback? Clearly.

In a statement to the Daily Dot, the company demurred about the possibility that Outback has a weaponized giant Bloomin’ Onion stretching 56 miles across our southernmost state, merely linking to the tweet and saying “we see things differently.”

Is that a threat?

“No plans,” the company added when asked specifically if Outback was plotting anything nefarious, “other than to bring bold steaks and Bloomin’ Onions to our guests!”

That’s not comforting at all.