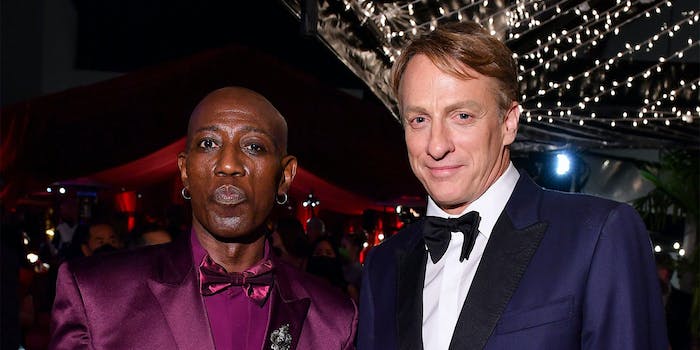 The moment was more than three years in the making.

Part of the excitement of going through the barrage of photos from the Oscars after-parties in the days following the Oscars is seeing which celebrities got to meet. For famed skateboarder Tony Hawk, it also gave him the chance to live out a meme to its natural conclusion.

Hawk was among the group of celebrities who presented at the Oscars; joined by surfer Kelly Slater and snowboarder Shaun White, the three athletes presented a montage celebrating 60 years of James Bond. But the real joy came later when Hawk swung by the Governors Ball, which is usually the first Oscars party celebrities attend after the ceremony, where he took a photo with Wesley Snipes. Snipes also attended the Oscars as a presenter, reuniting with White Men Can’t Jump co-stars Rosie Perez and Woody Harrelson to present the Oscar for best cinematography, which went to Greig Fraser for Dune.

But when Hawk posted the photo on Twitter Monday night, it was devoid of any pleasantries or platitudes that might’ve normally come with getting the chance to meet an actor you might’ve admired. Instead, it cheekily referenced a three-and-a-half-year-old meme.

He posted a different version of the photo to Instagram Stories with a different caption, “No War” and the acronym for “if you know you know” in parentheses.

Hawk is referring to a now-deleted viral tweet from October 2018 in which @silenthooper posted an image of Snipes crying in the 1991 film New City Jack. The reaction meme has been around for a while and is one that tends to reference having to turn your back on something you once loved. But on this particular day, Hawk was the one on display.

“When the race war is happening and I gotta kill tony hawk,” @silenthooper wrote.

Hawk isn’t mentioned by name. He not only found the tweet, but he also responded to it.

“I appreciate the hesitation though,” Hawk replied.

Hawk’s appreciation is the kind of tweet with an internet life extending far beyond whatever timeframe it took for him to think of a response. It shows that he’s in on the joke—he didn’t take offense, he rolled with it—and even riffs along with it; he doesn’t even take too much umbrage with a meme-inspired hypothetical resulting in his death. It makes him cool (or even cooler) in the eyes of the internet.

It’s such a memorable moment on Twitter that many of those who responded or reposted Hawk’s tweet knew exactly what he was talking about as soon as they saw it. And for those who didn’t, people had the original screenshot ready to go. It was context, but it was also a way to celebrate the bit living on.

If a moment like that is going to go full circle, it’d be hard to find a bigger night for it to fall on than the Oscars.