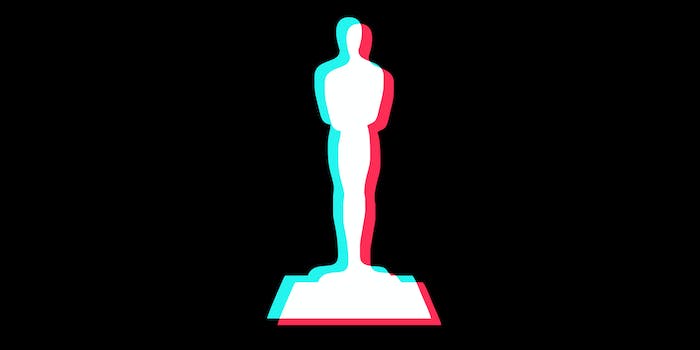 On the Oscars red carpet, TikTokers solidify their growing presence in the entertainment industry

'As content creators expand in popularity, we will continue to see them be leveraged by the entertainment industry...'

In hopes of appealing to a younger generation of film lovers, the Academy of Motion Picture Arts and Sciences partnered with TikTok and the platform’s stars to drum up buzz for the Oscars on Sunday.

Content from the event has received millions of views on the app, but it’s unclear how successful the campaign was in securing more eyes on the televised program. (The Academy did not immediately respond to the Daily Dot’s request for comment.) Still, the partnership, and the nod to TikTok during the performance of “We Don’t Talk About Bruno” from Disney’s Encanto, further solidified the app’s growing presence in the traditional entertainment industry.

“TikTok is an entertainment platform,” Catherine Halaby, Entertainment Partnerships at TikTok, told Passionfruit. “Creators are entertainers, and this is a platform where they can foster and grow their careers while reaching new audiences. Film fans on TikTok are passionate, creative, and engaged, and we were thrilled to support the Academy’s efforts to engage our community and elevate movie fandom on TikTok through hashtags, a creative effect, and a first-ever, creator-hosted TikTok LIVE from the Oscars red carpet.”

It is becoming increasingly common to see TikTokers and other social media stars on the red carpets for award shows, movie premieres, and even the Met Gala. While it can be puzzling for some to see influencers mingling with celebrities, social media creators are often tapped because they are skilled at appealing to wider, younger audiences. With the recent announcement of TikTok’s upcoming partnership with the Cannes Film Festival, it appears the relationship between the platform’s stars and Hollywood will only continue to grow.

“Those in ‘Hollywood’ are in the business of making content that people want to watch,” said Eric Dahan, Co-founder & CEO of influencer marketing agency Open Influence. “As content creators expand in popularity, we will continue to see them be leveraged by the entertainment industry for their ‘built-in’ fan bases.”

Dahan told the Daily Dot that traditional celebrities are understanding the importance of social media platforms like TikTok in sustaining relevance. Likewise, the entertainment industry is realizing that TikTok is driving many pop cultural trends, directly impacting businesses.

“There has been a blurring of lines in terms of ‘content’ and what people want to see; in many cases people perceive creators on TikTok, Instagram, and YouTube as being just as, if not more, relevant than traditional celebrities,” Dahan said. “Studies actually show that upwards of 70% of modern teenagers trust digital content creators more than traditional celebrities.”

Creators are often seen as more relatable, which can create a more intimate viewing experience for audiences. Chris Olsen (@chris), an actor and digital content creator invited to attend Sunday’s ceremony to help promote the event, further explained the appeal of Oscars content made by creators.

“The draw of being a content creator on TikTok is that people feel like they know you and that they are your friends,” Olsen said. “So when they see us at these big events, it’s as if one of their close friends is at the Oscars, and that may be more intriguing than just watching general media surrounding the event.”

For this year’s Oscars, TikTok enlisted Emily Uribe (@emilyuuribe) and Juju Green (@straw_hat_goofy) to interview celebrities on the red carpet for a TikTok Live. While Uribe and Green helmed the live stream, other TikTokers in attendance included Olsen, Reece Feldman (@guywithamoviecamera), and Rob Anderson (@heartthrobert).

Green, who has built a TikTok following of 2.9 million by creating videos discussing movies, is no stranger to red carpets, having hosted his first TikTok Live event in December during the premiere of Spider-Man: No Way Home. After a successful live stream at that movie premiere, he was asked to host again, this time for Hollywood’s biggest night.

“I think it was the natural evolution of who I am as a creator and how I can show that TikTok creators are more credible than they’re initially thought to be,” Green said.

As creators native to social media, Green and Uribe had a distinct understanding of the authenticity and candidness viewers crave online. When asking celebrities questions, Green kept the personal front of mind.

One moment in particular that got people talking online was a moment during the TikTok Live when Green and Jamie Lee Curtis talked about the actor’s love for the anime One Piece.

“I found out she was a fan of One Piece, did that research, and I’m a big fan of One Piece so I thought it would be really cool to talk to her about that,” Green said. “I posted the video [Tuesday] and a lot of people were really surprised and really receptive. The video went viral within about an hour or so and it’s those little things that I really wanted to prepare for to make them feel comfortable.”

Green also said that he tried to incorporate discussion of more populist, blockbuster films in his interviews because he wanted to be mindful of celebrating all film. He aimed to address the disconnect between the Oscar nominees and the movies average people were watching.

“On my page now, I try and cover that wide range,” he said. “[I] give you recommendations of those Oscar films as well put them on your radar, but I also talk heavily about those big blockbuster films that don’t get recognized as well. For me, I feel that I can be that bridge to not only have people get interested in [Oscar-nominated] films but to get the Academy themselves to recognize the big blockbuster films, the ones that the average audience that you want to see your ceremony are watching.”

While it’s unclear what impact TikTok has had on the Oscars, it’s apparent what TikTok can do for its creators. Social media, as we’ve seen in recent years, is a vessel for talent discovery. The Oscars’ embrace of social media this year, to Olsen, signaled an ongoing integration of the two.

“We are seeing content creators beginning to act and seeing actors creating more content,” Olsen said. “It’s a very exciting time to be in the social media space. “

The TikTokers’ presence at the Oscars has also proven to be an inspiration for their followers. Creators, Green said, present a clearer path to career milestones than traditional entertainers because audiences can see their journeys from the beginning. Green said his journey from becoming TikTok’s “movie guy” to talking to movie stars on the Oscars red carpet has inspired others to make their own film content.

“I feel very fortunate to kind of be one of the first TikTokers, not only to you know just make it to the Oscars, but to inspire people just to talk about movies on the platform,” Green said. “I’m just taking you on this journey with me and I’m doing what I love and you can do what you love too.”