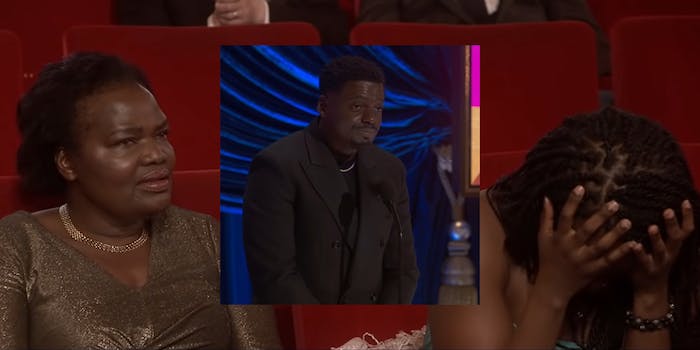 Kaluuya made the impromptu crack about his parents having sex during his acceptance speech.

Daniel Kaluuya (Get Out, Black Panther) was one of the early winners at the 2021 Oscars, earning a well-deserved Academy Award for best supporting actor for his role in Judas and the Black Messiah. Because this year’s ceremony allowed the acceptance speeches to run long, he treated us to an Oscar moment for the ages: an impromptu onstage reference to his parents having sex.

Kaluuya’s speech started normally, with him offering thanks to God, his family, and the team behind Judas and the Black Messiah. But after paying his respects to the Black Panthers and Fred Hampton—the man he played in this movie—he started to enter the rambling zone.

“It’s incredible,” he said. “My mum, my dad, they had sex.” Then the camera cut to his mother in the audience, staring in disbelief while his sister put her head in her hands.

Kaluuya’s mother provided such a pitch-perfect reaction shot that she basically became a meme unto herself, encapsulating the feeling of being embarrassed in public by your relatives.

The Academy Awards are an incredibly high-pressure environment, so it’s not unusual for the speeches to get a little weird and/or punchy. Even people who think they’re prepared will often be overwhelmed when they actually accept an Oscar. So while Kaluuya’s speech went slightly off the rails before the end, that’s totally understandable.

At his post-ceremony press conference, he easily laughed it off. “I’m gonna avoid my phone for a bit, mate,” he joked. “I think my mother’s not gonna be very happy… but she’s got a sense of humor, we give it to each other, so it’s cool.”