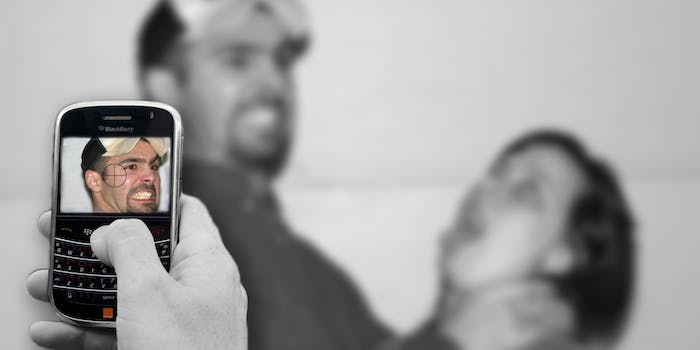 Yet it is far harder to get away from a camera than even Orwell imagined.

Don’t look now, but you might be on TV. If you can see another human being then you might be being filmed. Oh, and look up—do you see any drones?

Just 10 years ago, when I was making student films, a pretty low-end 35mm film camera cost something like $50,000, if memory serves. And the film to put in it could easily cost far more to shoot even a short movie. And even then, you just had a bunch of film in the can. No one was ever going to see it, and distribution is still an area that I find as mysterious as what was in the briefcase in Pulp Fiction.

Today, pretty much everyone carries in their pocket a camera that puts that hulking piece of equipment to shame. And distributing whatever they shoot to thousands—millions, even!—is the work of a few swipes that even your 5-year-old can do (but probably not your parents).

The ubiquity, size, and ruggedness of cameras today is solving all sorts of heretofore unsolvable mysteries. For example, last week a GoPro, a basically indestructible camera that syncs with your smartphone, solved one of the modern world’s greatest mysteries: What is it that happens inside the dishwasher?

Because the GoPro can go where even the iPhone fears to tread, it has captured things that have so far been only the stuff of fiction and discovery channel documentaries. A man in Australia recently strapped his trusty GoPro to his head to capture the experience of his cliff dive in Sydney bay. You sail through the air with Terry Tufferson (remarkably quickly, btw) and then you hit the water and surface to hear shouts that every swimmer dreads: “Shark! Shark!”

And the GoPro captures both Terry’s frantic swimming (Michael Phelps has nothing on Terry in this scene) and a close-up of a reasonably bored-looking great white. When will they start shipping the GoPro with a solid special effects package?

Still, the GoPro does not get all the fun. Who needs security cam footage anymore when you’ve got your trusty iPhone or Android?

Last week a bystander’s smartphone captured a Family Dollar employee pursuing a shoplifter into the parking lot. He confiscated her stolen air freshener, and heated words were exchanged. To underscore his point, the store employee used what came readily to hand and Febrezed the woman in the face.

If I’d been writing the movie, I could not have invented a better scene to dramatize the state of public surveillance and its effect on people than the incident in early May when a young man used his aerial drone to take photos of a beach in Connecticut. His hobby incensed a fellow beachgoer who called the cops on him. Apparently feeling that the authorities were not responding to the crisis with the appropriate celerity, she took matters into her own hands, first trying to liberate some of his equipment and then physically attacking him.

When the police did arrive, she told the fuzz that he had in fact attacked her. Unfortunately for her, the man had taped the entire proceedings surreptitiously on his phone. Ultimately she was arrested for assault and breach of peace.

In 1984, George Orwell wrote about the terrifying future under the surveillance state. Hounded by constant observation and state control over even the most intimate and personal details of their lives, the main characters are desperate to find some place private—away from the eye of Big Brother.

Today, we’ve learned how much we do live in a surveillance state just as active in its reconnaissance of its own populace as Orwell’s fictional Oceania. Yet it is far harder to get away from a camera than even Orwell imagined: There’s always another human with a smartphone in shooting distance.

State surveillance, it turns out, is outdone by social surveillance. What Orwell could not predict was that surveillance, when social in origin and coupled with the Internet, functions quite differently.

The state’s intelligence is used for security and control, and it is, above all, secret. With the advent of sites such as Facebook and YouTube, social surveillance could not be more public.

It may be too early to tell what this new form of surveillance will mean, but there are some hints.

A conversation has been evolving online about how we confront and deal with abortion as a society. The camera—or rather what it can capture—has been at the center of that conversation, particularly when, for example, an abortion counselor taped her own abortion and put it online. The hope among some is that having to personally confront the experience in a way only video can facilitate will add new perspectives to a conversation that has made little progress in 40 years.

I don’t know where this new perspective will take this very difficult conversation, and the effects of social surveillance will be multifaceted and wide-ranging. But if one of those effects is that we have more perspectives represented in public debate, then perhaps even George Orwell could find some reasons for hope.