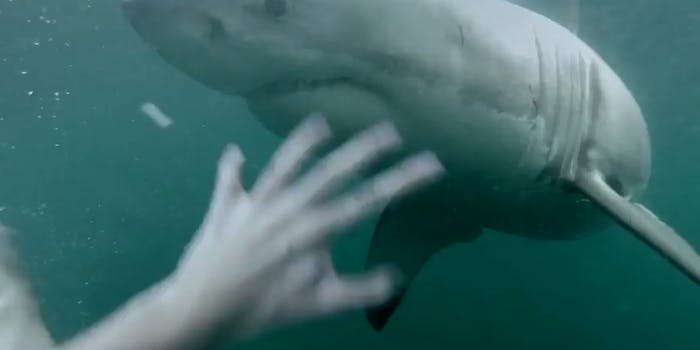 Terrified Aussie swims for his life in great white encounter

Somehow, this lucky swimmer managed to do every one of them, but he managed to escape after an encounter that only needs an ominous bass line to rival your favorite shark movie for thrills.

Okay, so the great white doesn’t look all that hungry, and it’s probably wondering why the man with the camera on his head is flailing and screaming at him.

But there’s plenty of terror to be had in this amazing GoPro footage, uploaded earlier today by YouTuber Terry Tufferson. In the short but harrowing clip, we experience a dive off Manly Jump rock into the pristine, cobalt water of Sydney Harbour with a swimmer—only to emerge to the surface to hear his friend’s panicked point-and-yell: “Shark! Shark! Behind you!”

From there, what looks like a frantic kick-and-swim race is on.

After you’re done yelling in fright along with the swimmer, it’s important to remember that humans kill 100 million sharks every year, all while most sharks, even great whites, won’t hurt people.

Although the footage made several news outlets, many viewers believed the video was a hoax, and that the shark had been edited in afterwards. Given that Australia is a hotbed of shark activity, however, real-life shark encounters aren’t that hard to come by.

As for whether those underwater screams are the real deal? Well, we hope we never have to find out firsthand.