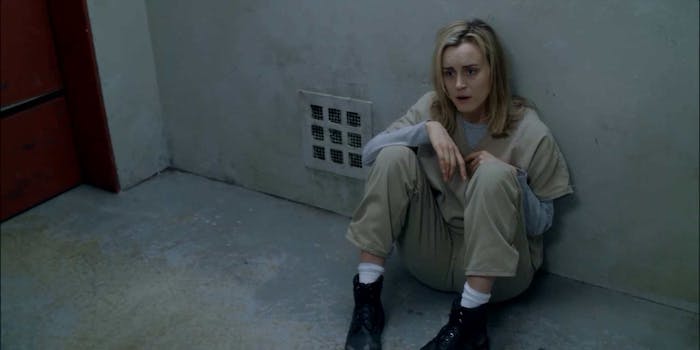 Forget about Piper. The show has worse issues.

Since debuting on Netflix in 2013, Orange Is the New Black has been hailed for its revolutionary diversity on the small screen. Featuring a predominantly female cast, the series counts black, Latina, and Asian women among its vast ensemble of inmates, while also casting the first trans actress in a major role on television (the amazing Laverne Cox).

Even better, the third season finds the show radically deemphasizing the role of its white female lead (Piper Chapman, played by Taylor Schilling), who is relegated to a fairly small supporting role. Chapman has long been seen as the worst part of the show, and in her absence, the stories of Litchfield’s women of color are, thus, given greater room to shine.

And behind the scenes, Orange Is the New Black seems to be just as female-dominated. The show is produced by Jenji Kohan, who also created Weeds, and boasts Lauren Morelli, Sian Heder, Sarah Hess, Tara Hermann, and Liz Friedman on its writing staff.

But the show has one glaring issue: Very, very few of its episodes have been directed by women. Men sat in the director’s chair for 30 of Orange Is the New Black’s 39 episodes—more than 75 percent of the time—with Michael Trim and Andrew McCarthy (of 80’s Brat Pack fame) helming a majority of the series. Only two women (Uta Briesewitz and Jodie Foster) have directed more than a single episode of the show, while Alison Anders (Gas, Food, Lodging), Nicole Holofcener (Please Give), and Daisy Von Scherler Mayer (Party Girl) all dropped by for an episode.

If you’re keeping count, that means Blaine from Pretty in Pink directed more of the series than Jodie freaking Foster.

While it would be easy to all wag our collective fingers at Orange Is the New Black or burn our outrage crosses in Jenji Kohan’s front yard, it’s reflective of a much larger problem. If a show that’s been wildly praised (some might even say overpraised) for its female diversity can’t even hire female directors, what does that say about Hollywood’s female director problem?

In May, the American Civil Liberties Union launched an investigation into the gender imbalance affecting the industry’s hiring practices. According to the New York Times, the ACLU called upon “state and federal agencies to investigate the hiring practices of Hollywood’s major studios, networks and talent agencies, and possibly bring charges against them, for what the organization described as rampant and intentional gender discrimination in recruiting and hiring female directors.”

Looking at the numbers alone, the ACLU’s case writes itself. Film studios hire one female director for every 15.24 men that get to lounge in the director’s chair; last year, only four percent of 2014’s wide releases had a woman behind the camera, a number expected to increase to around 6.6 percent this year. This spring saw Niki Caro’s MacFarland USA, Sam Taylor-Johnson’s Fifty Shades of Grey, Lana and Andy Wachowski’s Jupiter Ascending, Anne Fletcher’s Hot Pursuit, and Elizabeth Banks’ Pitch Perfect 2.

Aside from the bloated Jupiter Ascending, the budget for these four movies was $121 million total, less than half of what Marvel spent on Age of Ultron.

In a statement to BuzzFeed, director and writer Angela Robinson explained that studios think hiring a woman—let alone trusting her with a super-sized budget—is a “risk.” “There’s incredible resistance to hiring women,” Robinson explained. “People think women can’t run a set, that they can’t handle it. Sometimes you’ll hear someone outright say, ‘We don’t hire women’ or ‘We hired a woman that one time, and she did a bad job.’ They use that as an excuse for not hiring a woman again.”

If you think the situation is better on television, where female-driven dramas have carved out a space for women in the golden age of television, you’re right—but it’s not by much. Of Scandal’s 69 episodes, just 16 were directed by women, a slim 23 percent. The numbers for Veep (29 percent), The Good Wife (26 percent), and How to Get Away with Murder (33 percent) were only slightly better. A bright spot was freshman comedy-drama Jane the Virgin, one of the few shows on television whose episodes were primarily directed by women (59 percent).

But that’s not even the tip of the iceberg. Popular programs like The Simpsons (7 percent), The Sopranos (1 percent), Entourage (3 percent), Rectify (9 percent), Game of Thrones (6 percent), and Alias (5 percent) all rarely had women directors, despite featuring women in major roles. Deadwood, Curb Your Enthusiasm, Cheers, and Seinfeld never had a female director in their entire runs.

For Melissa Goodman of the ACLU, these discrepancies aren’t just depressing—they amount to “violations of civil rights laws.” Goodman, who spoke with the Daily Dot over the phone, was one of the two co-authors of a series of three letters that the ACLU sent to three civil rights agencies on hiring discrimination in Hollywood. “This isn’t general inequality,” Goodman said. “This is a really specific industry that’s doing a lot worse than other industries.”

While women graduate from film school in roughly equal numbers as men do, Goodman told me that doors continue to be closed for them. In addition to the “we had a woman last season” excuse, she said that women are often told they don’t have the right qualifications or that they lack special effects expertise, even if they have a tech background. According to Goodman, “women get pigeonholed into smaller… or girly-type projects.”

But what’s particularly telling about Goodman’s statement is that even women working on female-driven shows can’t catch a break. You can have a female executive producer, a female writing staff, and a female cast and still fall back on the same lazy tendencies as the rest of the industry when it comes to equality in the director’s seat.

Piper Chapman might suck, but she doesn’t suck nearly as much as systemic sexism.