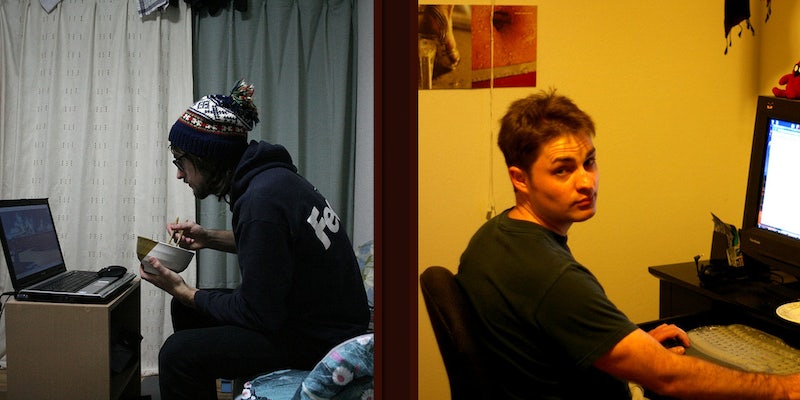 Open up your Internet and let me in

We need to be active in our selective Internet curation, keeping a check on ourselves so that our circles don't continue to shrink.

We are living in a world of ever-diminishing circles. I’ve written before about the Internet’s filtration capabilities, how we can create a slower, better Internet for ourselves by whittling away who we see, so that we can only see what we choose to see.

But suddenly the thought of that is immensely terrifying, especially in regards to targeted advertising, which is at the forefront of our diminishing Internet circles. I fall in line with recent studies that show most people over 35 consider targeted advertising to be a horrible invasion of one’s privacy. In contrast, most Millennials are welcoming of this type of ad filtration, seeing it as a valuable service to them. Why would we want to see anything that wasn’t tailored specifically for our wants and needs? Isn’t this the future? Aren’t these our jetpacks?

I may be an old fogey waving my cane in the air at young folks skateboarding on my lawn, but this is what I want to tell them: The terrifying aspect of this comes in the fact that we can’t always trust that the people on the other end of the algorithms have our best interest in mind. In the end, their goal is to sell us something, whether that something is a pair of headphones, shoes, a politician, or terrifyingly, an ideology. 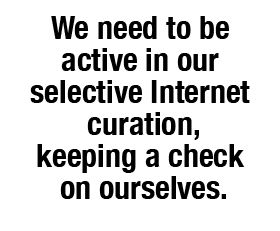 Fox News and MSNBC have this down to an artform: They use politics to isolate a targeted audience, a focus group of only people who agree with what they have to say, creating brand loyalty first and foremost. Networks are in the business of selling ads. Politics is a by-product, and these networks are repurposing their by-product as a corralling force.

This is all very conspiracy theory, but it’s part of the bigger picture: that we are seeing less and less of the world around us, narrowing our scope to a pinprick of vision in a vast world of differences. The differences themselves are then becoming narrow, the bridges less secure, until we no longer have common ground with our neighbor because we have filtered all common ground out of existence.

I recently met up with some old high school friends of mine over a bottle of wine. The topic turned to Facebook, and to old classmates who have sought us out online and requested our friendships. We accept, nostalgically, and watch as our feeds are filled with pictures of someone we barely knew, living an adult life we’re unfamiliar with. We talked about how election season drives us to hover over the unfollow button for these old classmates whose politics were the polar opposite to ours, but how we held ourselves back because it’s the only way we have any idea of what the other side is thinking. Interaction among people of varying beliefs is harder and harder to find these days: We’ve discontinued our associations, we’ve stuck our fingers in our ears. Delete. Unfollow. Close tab.

This isn’t just political. How many times do you see someone complain on Twitter about how EVERYONE is talking about Breaking Bad or the Oscars or, god, shut up about the football. And you look at your Twitter feed and it resembles nothing of the sort. Because my Internet is not your Internet.

We choose our own Internet. We choose who we follow, who we unfollow, who we pay attention to, who is hidden. Targeted ads are targeted to us based on choices we make, sites we visit. It may appear horrifying, that glimpse in the mirror, but it’s who we are. We need to be active in our selective Internet curation, keeping a check on ourselves so that our circles don’t continue to shrink, as circles on the Internet are wont to do, so that our viewpoints are not exclusive of the greater world around us.

Another group of friends has adopted a bold method of Expanding Circles Activism that they call “follow a teen.” From Tumblr to Twitter, they’re adopting young strangers as friends in order to understand better what goes on in the teenaged mind, a periscope pushed up through the layers of generational differences to catch a glimpse from the depths of Gen X of what Millennials do and say and think. I watch my young cousins and their use of the Internet, how they eschew Facebook and write screeds about their feelings on Tumblr, and know that their Internet is not my Internet, even based on something as simple as what media they choose to use. Where my generation is reading and sharing articles from the Atlantic, they are communicating via selfies. Where my generation sees Twitter more akin to television, they see it more akin to the telephone. And yet even amidst those generational differences are further narrowings of the scope of the Internet, to the point where every single person is divided by a common language.

Of course, this is just like how we see the world, regardless of connectivity: We all have our different perception of the way things are. But whereas offline we can be in the same room looking at the same view out the window, on the Internet, we are all in the same room looking out different windows. The more we look away from each other, the more we sacrifice our privacy and invite the marketers to narrow our scope of vision, the more we might lose our common ground.