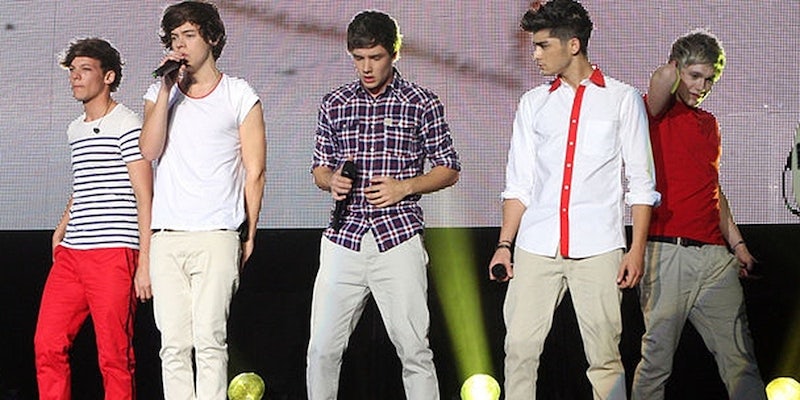 Directioners face abuse from within and outside the fandom over their choices of social networks and favorite relationship pairings.

Amid the deluge of earnest outrage the Daily Dot received in response to yesterday’s look at tinhatting in the One Direction fandom was an overwhelming insistence that drawing attention to the fandom hurts the fans.

The true source of that hurt seems to be a vortex of online harassment, self-image issues, and ship wars.

Katherine, a.k.a. harryfetish, the fan whose Tumblr post about meeting Louis Tomlinson at a recent music festival incited days of debate within fandom, told the Daily Dot that she was flooded with hate mail after she posted about seeing Tomlinson and current girlfriend Eleanor Calder together: “They told me that i was ugly, and that I’m a troll and should die. It made me feel rubbish and shocked me how horrible people could get.”

The Dot heard from numerous fans, or Directioners, on all sides of the fandom, who stated that they routinely experienced harassment and abuse from within and outside the fandom. Fans spoke of being told to kill themselves, and some confessed to self-harming as a result.

In July, a Larry Stylinson [Harry Styles/Louis Tomlinson] fan named Anne allegedly threatened suicide and disappeared after receiving hate on Tumblr. After this allegedly happened again to another fan, a fan named Emma sent a plea to Modest Management, One Direction’s management team:

“A lot of the girls are having problems with themselves, and that’s one of the reasons One Direction means so much to them; They made us all feel beautiful.

Tonight…a lot of girls wanted to self-harm or commit suicide. That’s not really new, and as the family we’ve become, we’re very aware of it, and we try to talk to each other, and spread the word, so that we can stop these girls.”

Such messages of love rarely get through. Though the fandom likes to call itself a family, fans are intensely polarized across favorite relationship pairings and social media platforms. Directioners on Twitter often want to interact directly with the band members and their entourage, but Tumblrites resent Twitter fans for bringing their activities to the attention of the band members. One of the main responses from fans regarding the Daily Dot’s coverage of One Direction fandom was simply: “Why can’t you just leave us alone?”

A constant stream of insults and accusations fly between ship factions, especially between “Larry” shippers, fans of the Harry/Louis pairing, and “Elounor” shippers, fans of Louis/Eleanor. “Larry or Elounor opinions are the worst,” Katherine stated. “You can say the smallest things and people will just kill you.”

“I was viciously cyber-bullied and eventually had to quit Tumblr,” a former 1D fan named Nadia told the Dot. As a fan who shipped multiple pairings, Nadia “got asks berating me for starving myself to become as thin as Eleanor. And I was variously told to kill myself, that I was fat, ugly, stupid, irrelevant, homophobic, and sent by management.”

None of this is new; ship wars and rivalries between different factions of fandom are as old as fandom itself. But the One Direction fandom is primarily composed of girls and young women, many of whom are experiencing all the drama of fandom for the first time. Because Tumblr and Twitter both make it possible to interact with everyone in the fandom who uses general tags, like “one direction” or “larry stylinson,” all of that fannish energy can translate into overwhelming intensity. Several 1D fans writing The Dot yesterday positively compared the experience to a religious fervor. But like any deeply held belief system, challenges to the devotion fans feel can create tensions and outrage.

The idolization can also spur unhealthy behavior. Numerous fans pointed out Eleanor Calder has inspired a mini-fandom in her own right, known as Calderics. Several Calderic fans told the Dot that their journals are about celebrating Calder and aspiring to be like her, but other fans claimed that these are actually pro-ana communities, predicated on images of thin women and weight loss to a degree they find unhealthy. One such Tumblr’s title is “3500 calories? 1 pound.” Larry shippers attempt to inform the Calderics that “you are all beautiful the way you are,” while others beg, “please stop starving yourselves.”

But it’s hard to deny the overtones of shaming inherent in these accusations, especially when Elounor fans and Larry fans each seem to pair feelings of victimization and harassment with accusations that the other side is far worse than they are. The “calderism” tag, for example, illustrates that criticism often starts and stops with insults, and given the sheer velocity with which fans hurl vitriol at each other, and even at the band members and their girlfriends, it’s hard to see sincere concern reaching across ship lines.

“I think the hate that different ships and girlfriends get is absolutely awful!” Katherine told us. “It is definitely getting worse as the fandom gets bigger. They are people, you know.”

So why do Directioners stay involved?

Overwhelmingly, we were told, it’s because of the love. Despite all the harassment, Katherine insisted that she was as devoted to the fandom as ever:

“Most of the fans are really friendly, but its just the few who take things too far. I have a lot of friends on here which wrote so many messages telling me to keep strong. I do still ship Larry slightly despite all the bad comments i’ve got! I also love Lilo [Liam/Louis], but to be quite honest i just love all the ships!”

“I… have absolutely no shame in loving the boys the way that I do,” said one fan. “They make me feel great about myself without even having ever met them…And even though I hate this fandom at times, in the end, we’re still a family.”

It may be that in the end the key for Directioners remaining a family is recognizing that even family members who quarrel can come together in the end. A plea started yesterday to fix 1D fandom now has 3,000 reblogs and counting, and a similar hashtag is making the rounds on Twitter. For every instance of hate on Tumblr and Twitter, there is an outcry from other fans to knock it off.

As for Katherine, she had one final message for fans visiting her blog in the future:

However much it may pain some fans to know that my experience meeting Eleanor and Louis was true, it doesn’t give you the right to accuse me of lying or making this up. Thank you everyone for the support, and if you are thinking of sending hate, just remember that i am a person too and no one deserves to be hated on.

If Katherine’s followers and other Directioners can manage to remember this message, then they just might discover what makes One Direction fandom truly beautiful.