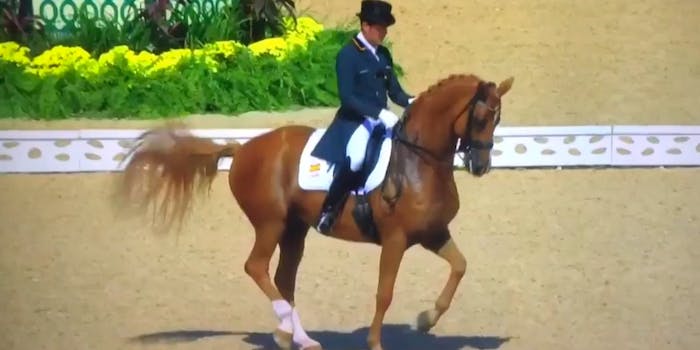 Somehow, this didn't win a medal.

Usain Bolt‘s smile may have inspired a slew of memes, but a four-legged Olympic competitor proved to be a meme in its own right.

Given that the triple-Grammy-award-winning 1999 Latin fusion hit single has enjoyed a second life as a not-all-that-ironic meme of late, it will surprise you not at all that people fairly lost their shit.

(puts on top hat)
(buttons up tailcoat)
(gets on horse)
I am now prepared to dance to "Smooth" feat. Rob Thomaspic.twitter.com/z016DJhQ4t

BREAKING: The IOC has awarded the horse who danced to "Smooth" then Bon Jovi the gold horse medal for best horse musical opinions

Watching a Horse dance to Smooth by Santana and it's probably the best thing I've ever seen on a TV ever.

Yet, while everyone agreed that Lorenzo’s routine was a hot one—he gave us his heart, made it real—he and rider Severo Jesus Jurado Lopez placed fourth, falling just shy of a medal for Spain, Santana, Rob Thomas, and awesome horses everywhere. The Olympics are a joke.

Neither Carlos Santana nor Rob Thomas have publicly commented on this athletic atrocity, but it goes without saying that either would give their world to lift Lorenzo up, would change their life to better suit his mood.

Because he’s so smooth.