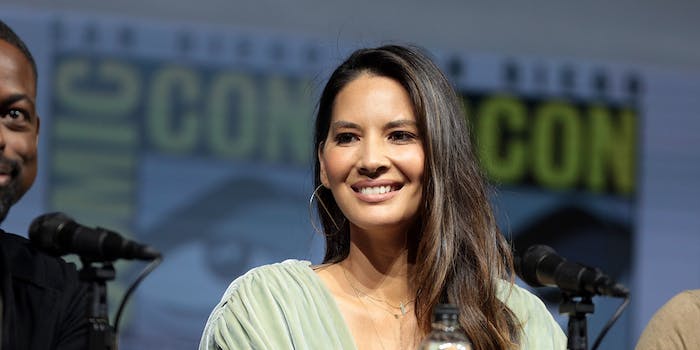 'I will fix America’s obesity problems by taking all motorized transport away from fat people,' Munn wrote.

Olivia Munn’s relationship with John Mulaney is one of the top celebrity gossip stories of the month, provoking a lot of strong opinions. And in the grand tradition of celebrity anti-fandom, this burst of publicity has inspired people to dig up problematic elements of Munn’s past. In particular, many are recalling a bizarre and fatphobic passage from her 2010 memoir Suck It, Wonder Woman!: The Misadventures of a Hollywood Geek.

In her memoir, Munn joked that fat people should be banned from using motorized vehicles, forcing them to lose weight by walking through specialized “fat tunnels.”

“I will fix America’s obesity problems by taking all motorized transport away from fat people. In turn, I will build an infrastructure of Fat Tunnels, where all the fat people can walk. This will create jobs and subsequent weight loss.”

Munn has been criticized in the past for making (or participating in) racist and misogynist jokes, especially during her tenure on Attack of the Show! and The Daily Show—and, yes, in her memoir. During her rise to fame as a geek-culture sex symbol in the late 2000s, Munn developed a “cool girl” image; an actress and TV presenter who loved video games and edgy humor. At the same time, she was on the receiving end of racism and misogyny herself, facing scrutiny and harassment as a woman of color in male-dominated spaces, and speaking out about abusive men in the industry. She’s a complicated figure.

“I date the blacks, I date the Mexicans. I date ’em all for comedy,” Munn said in a 2010 interview, explaining that she dates guys from different races in order to get away with making offensive jokes. This is a pretty solid illustration of Munn’s comedic brand at the time, the same year she published her memoir and landed a high-profile gig on the Daily Show.

That fatphobic memoir quote is definitely gross, as are plenty of things Munn said at earlier stages of her career. But the main reason people care now is due to her relationship with John Mulaney. While Mulaney’s fans know that his comedy persona is different from his private life, he still has a “nice guy” image. And that clashes with Munn’s combative, controversial reputation. Some people are clearly surprised (and judgemental) to see him date someone with an offensive sense of humor—even though in reality, we know almost nothing about what this relationship is like behind closed doors.