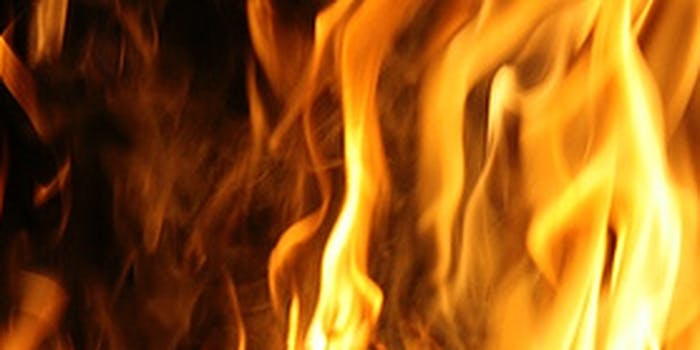 Filling up your gas tank is such a casual chore you can almost forget how dangerous the equipment involved really is. Luckily for the driver who sparked a fire at a White Plains, N.Y., Mobil station, off-duty cop John Vescio kept a cool head amid chaos.

In the video below, Vescio—a 20-year state police veteran stationed in the Bronx—can be seen standing at a pump in shorts and a Yankees jersey. Suddenly, a car rams into the machine, which nearly crushes him as it erupts in flames. Vescio beats a hasty retreat but soon returns to drag the unconscious motorist, who had passed out from a diabetic emergency, to safety.

Vescio said he hardly had time to think because everything happened so fast. “The way I look at it I was doing the right thing,” he told the Journal News. The man he rescued is in stable condition, with his family profoundly grateful. Four other people were treated for minor injuries.

The Westchester County Department of Public Safety is investigating the crash, which firefighters said could have been much worse, as a fire suppression system at the station never kicked in.

You know what sounds nice right about now? A long, luxurious trip by train.