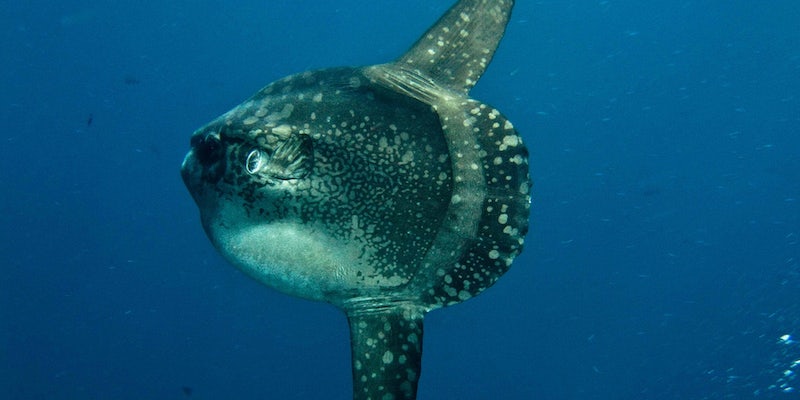 This ocean sunfish is a wicked pissah.

If anything is peak Boston, it’s got to be this video.

Posted to Facebook last week, Michael Bergin is shown reacting to his first sighting of some sort of “giant sea turtle,” “baby fuckin’ whale,” or a “big floundah.” Well, whatever it is, it’s big and looks hurt.

“We’re seeing some shit we ain’t never seen before, kid,” Bergin says, which explains the youthful excitement the 41 year-old can hardly contain. As of this writing, the video has gotten almost 1 million views, and more than 10,000 shares. But they never find out, even in a different video that shows that Bergin caught the fish, although the Boston Globe reports that he didn’t keep the fish and called the Coast Guard instead.

Here’s what we think we know:

So what the heck was that fish, bro? Some kinda wicked monstah?

According to National Geographic, it was a Mola (sunfish). A large fish that looks like it’s cut in half due to a fin that doesn’t fully grow.

What the fuck was the fish doing up there on top of the water there, bro?

Molas generally hang out just at the water’s surface catching some rays. They aren’t whales, they are still fish. Their skin is infested with parasites, so they also breach the surface so birds can feast upon the pests.

Bro! Should I be scared of that fuckin’ thing, kid?

Funny enough, a lot of people mistake their fin for the dorsal fin of a shark, but they are generally harmless. They mostly feed on jellyfish, which can also be a problem for the fish since they commonly suffocate on plastic bags that resemble their prey.

So can I catch ‘em or what?

According to Great Blue, the Final Fantasy XI guide to fishing, the Mola Mola can be caught in an open sea route with a variety of bait, including a slice of Bluetail, sardine, or cod. Of course, that’s just in a video game, so I’m not totally sure.

They look like they’ll make a sturdy mit. I’m gonna catch the bastahd and take it to the Sox game.

I wouldn’t advise that. Even though they have a rough skin texture, it probably wouldn’t be a good idea to use them as a glove. Plus, remember when I said it had parasites?

Eh, who asked you? I’m takin’ that fish and puttin’ it in the beatah [car]. I’m gonna get wicked cash for this fish meat.