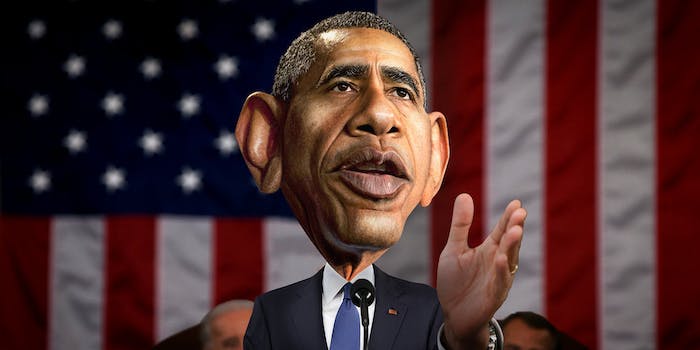 We know how to treat racist symbols, but what about racist policies?

In case anyone ever had a doubt, President Obama is black.

Regardless of his position as commander-in-chief, nothing will erase his own experience of navigating institutions that have been soured by the evils of racism, and how he chooses to discuss it, as a black person, is completely up to him. However, his latest remarks on racism drew ire, because the man who holds the nation’s highest elected office used a word with a particularly troubled legacy. In an interview on the WTF podcast with Marc Maron, Obama spoke about the current context of racism in America. But what caught the Internet’s attention was that dreaded “N-word.”

“What is also true is that the legacy of slavery, Jim Crow, discrimination in almost every institution of our lives, that casts a long shadow and that’s still part of our DNA. That’s passed on,” Obama told Maron, acknowledging that things have changed with each passing generation—but that racism is still alive and well. “We are not cured of [racism]. It’s not just a matter of it not being polite to say ‘n**ger’ in public, that’s not the measure of whether racism still exists or not.”

Soon after, Internet coverage played up his usage of the “N-word” for clickbait, and combined with the online chatter, far too many people fell into a typical trap. Instead of focusing on Obama’s critical insights on racism, from his experience both as a black man and as the country’s first black president, the public fixated on the usage of an anti-black, racist slur—and by a black person at that.

However, the controversy around Obama uttering the “N-word” unwittingly proved his point. We’re still OK fixating on overly racist expressions, which deserve all the condemnation we can muster, but have a hard time dedicating more meaningful attention to the more insidious policies and practices that sustain the legacy of racism.

Dear media. Not the 1st time Obama used the n-word in an honest discussion of race. Read Dreams from My Father. Here: pic.twitter.com/uby1Jq5YHP

Everyone realizes Obama probably isn't the first U.S. president to use the n-word, right?

But certainly first about whom it's been used!

As Dara Lind notes at Vox, Obama is not the first U.S. president to use the “N-word,” regardless of context: “Only a few years before Lyndon B. Johnson signed the biggest civil rights laws in American history, he routinely described an earlier civil rights bill as ‘the n*gger bill.’ Harry Truman referred to pioneering black Congressman Adam Clayton Powell as ‘that damned n**ger preacher.’” In those times, it was socially acceptable.

Now, most well-meaning white people know the “N-word” is off limits, often policing fellow whites over their usage, because they know it’s a sign of disdain for black people that dates back to slavery and segregation. It’s usage by white people has long been a mechanism of power and privilege, a way of keeping black people in their supposed place of subordination to whites.

But when it comes to usage of the “N-word,” far too many people miss the point. Instead of using their white privilege to hold fellow white people accountable, well-meaning white folks police how other black people use the “N-word.” Or, even worse, they ask, “Why can black people say the n-word and we can’t?”

The debate over the “N-word” and other overtly racist expressions seems to continue cropping up during the ongoing conversation about race and justice issues in America. Following the uprising in Baltimore, sparked by the death of Freddie Gray at the hands of police officers, city councilman Carl Stokes told CNN’s Erin Burnett that her defense of using “thugs” to describe people who rioted or protested was a coded language at its worst. “Just call them n*ggers,” he said.

But during a follow-up segment, Ashleigh Banfield thanked him for not using the “N-word” during the first portion of their interview, citing how hurtful the word has historically been.

“I was watching Erin’s show last night and I was livid,” Banfield told Stokes. “I have to say, you’re a leader and so many people have said don’t say it in rap, don’t say it so loosely, don’t assume you can say it because you’re one color and another color can’t. It’s just so painful to hear it no matter what color we are and I’m glad you decided not to use it on this show.”

Stokes visibly wasn’t too thrilled with Banfield chastising him, a black elected official, on how he uses the word as a member of the affected group. How black people choose to use the word, or avoid using it, is their business, as they’ve been the people subjected to the power and dehumanization behind it for so long. However, Stokes allowed the conversation to segue into some of the pressing issues that precipitated the riots in the first place—because that’s what deserved more air time.

Whereas reactions to the outcry insisted the chapter was a lone case of racist behavior in Greek organizations such as SAE, a closer look proved otherwise. Reportedly, members of OU’s SAE chapter learned the song at a national SAE event, but the organization’s leadership said in a statement there was “no current evidence” that the song is widespread amongst the more than 250 chapters of SAE.

But as some pointed out, SAE’s reputation as a bastion for racist behavior and an environment that privileges white maleness isn’t limited to a racist song. In fact, members of the organization fought for the Confederacy, and the national organization’s promotional materials have lauded its history as “the only national fraternity founded in the antebellum South,” as ThinkProgress notes. Racism has long been an institutional issue for SAE, but it took a leaked video to expose just how much it remains salient in the organization.

Whether it’s frat boys who sling around slurs while evoking imagery of lynchings, a black city councilman decrying racially coded language, or the country’s first black president having a candid conversation about race in the context of the Charleston murders, it’s seemingly easy to focus exclusively on symbols of overt racism—rather than understand them as symptoms of a much deeper problem. Where there’s smoke, there’s usually a fire.

Still, as Obama suggests, the decreased usage of these racial slurs and symbols can’t be the only indicators of progress in America. Even if people who ascribe to white supremacist ideology can’t express themselves in such language without backlash or retaliation, they’ll find other ways to act on their beliefs, whether the public knows it or not.

One can be critical of overtly racist expressions while also instigating action on issues such as gun control and policing practices that disproportionately target people of color. Policy changes matter, and it’s important to use these controversies—such as state governments flying the Confederate flag and Obama’s usage of the “N-word”—as access points for a deeper discussion, on the longstanding issues that continue subjugating black people, and the need for new solutions that uplift black communities.