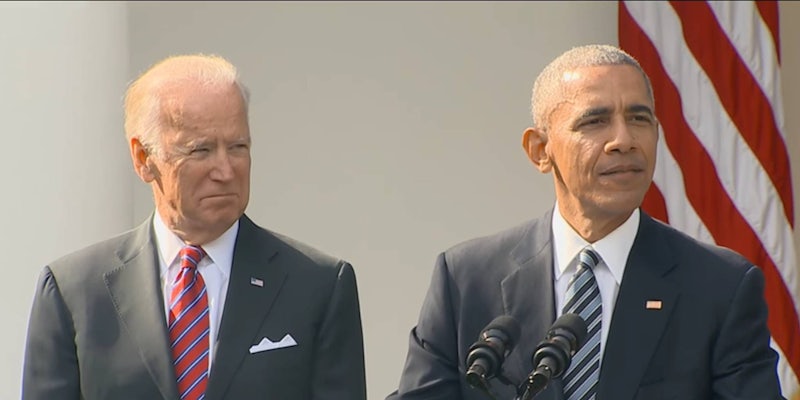 These memes are the best way for Hillary fans to cope.

With the election of Donald Trump as America’s 45th president, it’s no surprise that plenty of people are unhappy.

Thanks to the inflammatory extremity of so much of Trump’s rhetoric and policy proposals and the effective anti-mandate given to him by a substantial popular vote loss (the Hillary Clinton ticket is expected to finish with millions more votes than Trump received), it’s no surprise that so many people are frustrated, confused, hurt, and fearful.

In times like these, sometimes it helps to have a laugh.

Which is probably why so many memes of President Obama and Vice President Joe Biden are kicking around right now, roasting the reality that Trump will be entering the White House in January. As far as executive branch duos go, there haven’t been many who’ve had, reportedly, as close and friendly a relationship as these two, so the buddy comedy angle has always been strong.

But now, with the lights dimming on the final months of the administration, they’re getting a joyful send-off on social media, even amid some challenging circumstances. You probably could’ve guessed your old pal Joe would have some tricks planned for the Donald, no?

BIDEN: I MADE ALL THE WHITE HOUSE DOORKNOBS GIANT

Obama: "Joe, why are you still holding my hand?"
Biden: "I wanna freak Mike Pence out"
Obama: "But why?"
Biden: "Just roll with it" pic.twitter.com/o5KZZ0Ysgz

Biden: I gave him the wrong address

Biden: idgaf what they call him pic.twitter.com/6pQzOJY92x

And, of course, some people always want a piece of the attention.

Farage: Yeah our meme will be as successful as the Biden/Obama meme, don't you think?
Trump: Of course, I have memes, I have the best memes. pic.twitter.com/ykgsd9SffR

Make no mistake, the end of the Obama era will signal an end to the first truly meme-rich presidency in American history. And with the Trump administration incoming and the often left-wing sensibilities of countless political meme-makers, it seems likely that presidential memes are headed for a bit of a dark period. But at least we’ll always have the good old days, right?

Biden: can i put whoopee cushions under all the chairs before he gets here

Obama: joe im on the phone

Never change, imaginary internet Joe Biden. You’ve been the hero we needed these past few days.