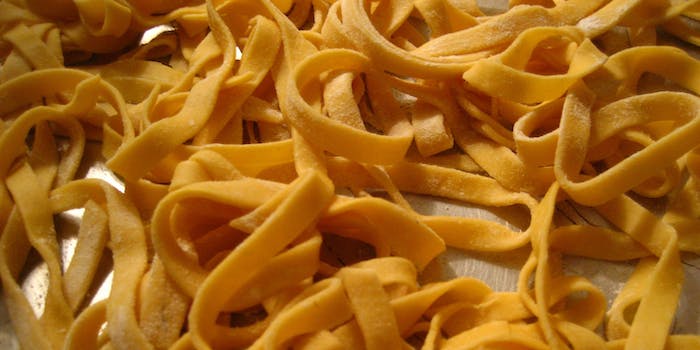 Debate all you want, here is the definitive ranking of ‘non-canonical pasta shapes’

Tired of mac n cheese? This is the pasta list for you.

What exactly qualifies as a “Non-Primary-Canon pasta shape” is open to interpretation. Certainly macaroni and spaghetti are both pretty commonplace, but what about a nice twisty fusilli or a fun and flirty farfalle (otherwise known as bowtie pasta)?

It really all depends on who you ask and what part of the world you’re from.

Nonetheless, a man named David Rudnick has created a ranking of what he’s calling “Non-Primary-Canon pasta shapes” and it’s probably the best thing currently on Twitter.

entries this year are drawn from a shortlist that was CAREFULLY compiled by applying BRUTAL and SCIENTIFIC criteria that I WILL NOT reveal pic.twitter.com/OKTc58XalP

After posting the list, he proceeds to rank the various noodles, breaking each one down so you can pick the perfect unusual pasta to impress people at your next dinner party.

• pasta NOT a place for GraphicsDesign
• this is just a disc
• m8
• TERRIBLE sauce retention
• wilted mouthfeel pic.twitter.com/Lbm3rtAY91

To cream of the wheat, Mafaldine.

In between various pastas are given high and low marks, with the all important “sauce retention” attribute being heavily weighted.

• Oh dear
• Almost feeling sorry for you
• those ridges aren't gonna help the sauce stay on m8
• marks given for having diagonals pic.twitter.com/6Duxv2sV0F

Obviously people took issue with some of Rudnick’s choices.

What about Pici? It's as if you HATE Tuscany.

canon pasta, not on shortlist

Some especially didn’t care for his choice of winner.

No! You have this too long-sauce flinging stuff at your #1 spot where the awesome chunky meat sauce loving, perfect when baked Rombi is 20?

how do I Ban you from this thread

If nothing else, amateur chefs might find the rankings useful, although, it doesn’t look like he really took baking into account. If that does happen to be your thing, you can’t go wrong with a nice firm ziti.

Although ziti is probably canon pasta, to be fair.