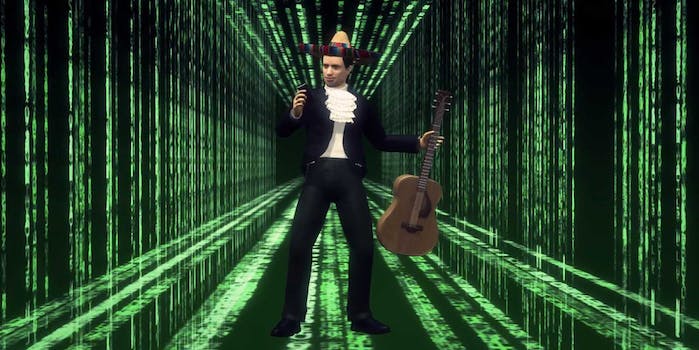 There are still questions about New York City mayoral candidate Anthony Weiner’s latest sexting scandal, but one animation studio has given visuals to the latest blow to the politician’s career.

Taiwan’s Next Media Animation (NMA), a group of self-described “crazy Taiwanese animators,” covers all the news that’s fit to animate, with an average turnaround of three hours on a news story.

Weiner came clean about the scandal Tuesday night after gossip blog The Dirty reported an anonymous woman’s six-month online relationship with the former congressman, who went by the alias “Carlos Danger.” During that time, Weiner allegedly sent the 22-year-old woman a sexually explicit photograph and promised to get her a job at Politico.

The name “Carlos Danger” was enough for NMA to go on for their latest animation of the politician. The studio portrayed Weiner as a traditional mariachi singer with a sombrero, the outfit, a mustache, and a guitar—plus a cell phone, aimed directly at his crotch.

Hispanic groups are angry with Weiner for impersonating a Latino with the Carlos Danger alias, but NMA predicts it won’t be long before other aliases exemplifying other cultures such as “Sheik My Nuts” and “Wong Hung Lo” emerge in subsequent scandals.