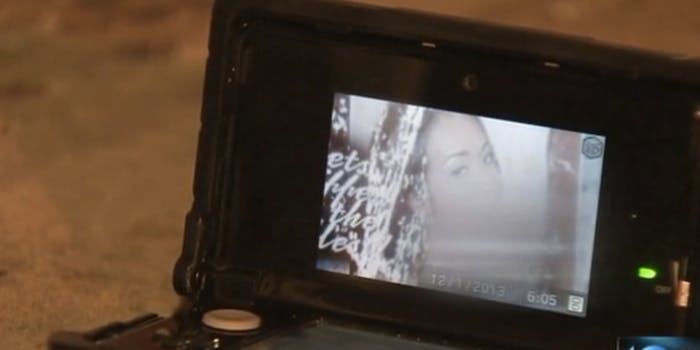 The console came from a local Walmart.

According to local news station WAVY News 10, the eight year-old received a brand-new Nintendo DS as a gift on Christmas morning. When he tried to use the device to take a picture of himself and his relatives, the image was sent to a preexisting file, which already contained at least a dozen smutty images (WAVY skimps on the details of the photos themselves, though one can assume the 8-year-old probably won’t when he tells the story to his friends at recess).

Now, the boy’s father, Tom Mayhew, who bought the Nintendo DS at a local Wal-Mart on December 23, is on a mission to find out where the photos came from.

“There is no reason for them to even really be on there,” Mayhew told WAVY News 10. “It’s disgusting for one. It seems that this was the only thing left on it.”

Although Mayhew initially surmised that Nintendo had made a mistake by including the photos, there is evidence that the item, which was sold to him as brand-new, was used by a previous owner: the photos were time-stamped from early December, and the device was already password-protected with set (presumably very liberal) parental controls.

Ultimately, it’s tough to say for sure how the photos ended up in the console, because Wal-Mart refused to comment on the story. So in the spirit of holiday generosity, let’s just say the mix-up was intentional and attribute it to a new Wal-Mart sex education initiative, where the company leases handheld game consoles to amateur pornographers before marking them down and reselling them to elementary schoolers.