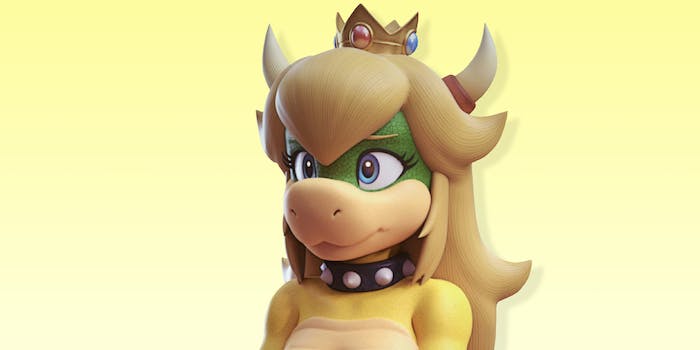 Nintendo put the kibosh on the fan-created character.

Shot through the heart, and Nintendo’s to blame: Nintendo’s officially given Bowsette a bad name.

Well, not a bad name, per se, but there won’t be any Bowsettes in Mario games anytime soon. Nintendo has officially dashed Bowsette hopefuls’ dreams in a rather roundabout way.

On the official New Super Mario Bros. U Deluxe website, the power-ups available to Mario, Luigi, Peach, Napper, and Toadette are detailed in a fun tableau. Each item is detailed with a description and a screenshot to demonstrate how it’s meant to be used in-game. The text for the Super Crown reads “When Toadette finds one of these, she can transform into the super-powered Peachette. (Sorry Luigi – only Toadette can use this item!)”

So that’s that – only Toadette can use the item, which means Nintendo essentially isn’t interested in Bowsette, Booette, or any of the other countless variations on the Mario characters people flooded the internet with over the last few months. Also, bizarrely, the text seems to apologize to Luigi, of all characters. Did Luigi have a particular interest in wearing a crown and dressing up?

Let’s rewind a bit, first. How’d all this start, anyway? Nintendo announced a Nintendo Switch release of New Super Mario Bros. U for January 2019 called New Super Mario Bros. U Deluxe back in September 2018. The official trailer revealed a new power-up called the Super Crown, specifically for the new playable character Toadette. When Toadette finds the crown, she turns into “Peachette,” a version of Princess Peach decked out like Toadette in full princess garb. Peachette can double jump, utilize Peach’s floating jump, and gets a special dress to top it all off.

But wait, who’s Bowsette? Glad you asked – Bowsette was a popular 2018 meme spawned by a fascinating idea: What if the Super Crown introduced in New Super Mario Bros. U Deluxe could be used on any character in the Mario universe? The result was a glorious selection of fanart (often NSFW) of Bowsette, the result of Bowser wearing the Super Crown and turning into a gorgeous mashup of Peach and Bowser. No, the name doesn’t make sense since Toadette turns into Peach to make Peachette, but…work with us here.

Of course, the diss is just marketing copy. Nintendo hasn’t given any statements on Bowsette nor its future plans for the Super Crown. The in-game item is clearly only meant for Toadette, as it’s always been – did anyone actually think Bowsette was going to become canon?

Apparently so. And as expected, some Bowsette fans aren’t taking the news well.

We lost one of our own tonight

And all the world cries. Feeeck.

Bowsette will be forever canon for us.

nuh uh uh… nintendooo, you can’t say that… no no noooo, the crown turned toadette into peach. if it turns out it turns other characters into peach, then at least the concept of bowser turning into a “bowsette” is cannon. this is big oopsie doopsie

Bowsette is canon in my heart. https://t.co/f7IPQUOOq6

"No Bowsette in NSMBUDeluxe"
Cowards.

Meanwhile, the more realistic fans were quick to remind everyone that Bowsette never had any chance of being real, and we knew she wasn’t anywhere near being a “true” Nintendo creation to begin with…because duh.

>they confirmed this the moment they even revealed the crown

Now, there’s no need to mourn, though. You know why? Bowsette’s always going to live on – she’s in your heart. And you can keep drawing her all you want.