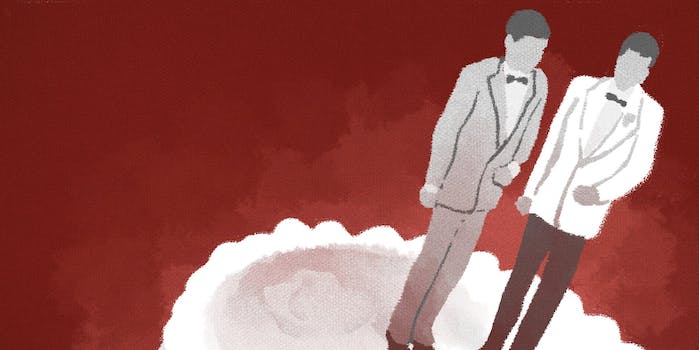 June 26. Three times now, and evermore, will it be a historic day for the rights of same-sex couples at the U.S. Supreme Court. In 2003, the court decriminalized sexual activity between partners of the same sex. Ten years later, it struck the federal and California state ban on same-sex unions. And now same-sex marriage is the law of the entire land. Marriage is now simply that: marriage. Celebrations are rightfully in order.

But do not be deceived—LGBT people do not have full equality. The struggle for LGBT rights is far from over.

Marriage is not the penultimate LGBT justice issue; in fact, it’s the tip of the iceberg. Now that the love and families of same-sex couples have legal recognition, other important social and institutional barriers faced by the broader community remain an everyday threat.

It’s about more than marriage. It’s about more than being comfortable with a coworker having a photo on their desk of their same-sex partner, let alone them being able to openly discuss it with colleagues. It’s about more than assuming your neighbor is heterosexual, and speaking with that presumption. (Jenny, you’re dating someone new? Who’s the lucky guy?) It’s about more than understanding why it’s not OK to call someone a f****t, and not using “gay” or “queer” as pejoratives. While these matters are important for how we socially and legally treat people who aren’t heterosexual, it’s important to remember that heteronormativity, biphobia, transphobia, and misconceptions about binary gender still run rampant in many policies and practices, in virtually every American institution.

Change won’t happen with one major Supreme Court decision. The ruling doesn’t mean same-sex couples have the exact same rights as their heterosexual counterparts, nor does it mean that all members of the community, including bi, trans, and gender nonconforming people, are fully enfranchised. The struggle continues—and it includes these following (and many other) issues of justice for LGBT people:

1) In most states, LGBT employees can still get fired.

Although marriage is now legal in all 50 states, there are 29 states where LGBT workers have no legal employment protections. As Fast Company notes, the Employment Non-Discrimination Act has languished in Congress for years. It’s not as though there aren’t any LGBT people in workplaces already, regardless of whether or not they’re open about their identities. But far too many remain subject to the unconscious or deliberate anti-LGBT biases of employers.

2) Undocumented, queer, and trans immigrants are still being detained, deported, and abused.

Indeed, marriage is a pathway to citizenship, one that’s now an avenue for queer and trans people in any of the 50 states. But for those who are undocumented, are single, or don’t wish to get married, or who are already caught in the Immigration and Customs Enforcement system, they’re still vulnerable to deportation and human rights abuses during detention. In fact many detained, undocumented trans people endure physical and sexual abuse, get misgendered and placed into a prison that doesn’t align with their gender identity.

It’s the issue that that Jennicet Gutierrez, an undocumented trans Latina activist, challenged President Obama about during the White House’s recent LGBT Pride reception, but she was booed, branded as a heckler, and “shut down” by Obama for the interruption.

Week after week, there’s a story about a business owner who doesn’t want to make a cake for a lesbian wedding, or expresses discomfort about serving a transgender guest in their establishment. Or for trans and gender nonconforming people who just wish to use the restroom that corresponds with their identity, there’s still challenges in affirming the right to pee in peace for people who aren’t cisgender. Although these situations are different than (but intersect with) the struggle for racial justice, it recalls the stories of indignities faced during segregation, where white people and “coloreds” used separate restrooms and water fountains, or were separated from each other while frequenting restaurants or in public transit.

According to the Movement Advancement Project, 28 states still have no LGBT protections for public accommodations, even in states where, now, same-sex marriage is legal.

#Arizona Bar Owner Apologizes to #Trans Woman for Kicking Her Out: https://t.co/VN1yoLk3s7 As it should be. pic.twitter.com/cAulHtY8uV

4) LGBT youth are disproportionately homeless and have few resources.

The Williams Institute at UCLA estimates that 40 percent of the homeless youth population identifies as LGBT. For young LGBT people who don’t have supportive family networks, or end up homeless for whatever reason, life on the streets poses numerous mental and physical health risks. As the National Coalition for the Homeless notes: “LGBT individuals experiencing homelessness are often at a heightened risk of violence, abuse, and exploitation compared with their heterosexual peers. Transgender people are particularly at physical risk due to a lack of acceptance and are often turned away from shelters and in some cases signs have been posted barring their entrance.”

Today is a day to celebrate, but we have to make sure we continue fighting for workplace protections, trans rights, homeless LGBT youth, etc

Young people can still learn about the “birds and the bees” without a lesson about how it works for two people of the same sex. That also includes a sorely needed conversation about the beauty of the gender spectrum, and why sex is different from gender (keep in mind, birth-assigned sex is about what’s between the legs, gender is about what’s between the ears). At this point, young people should know that family, reproductive, and sexual health isn’t only a matter of being cisgender and heterosexual. Honoring LGBT differences in health, needs, and outcomes is essential not only for sex education to reflect a world filled with possibilities, but also so that people can take good care of themselves.

6) Trans women, especially women of color, continue getting killed at an alarming rate.

Each year in November, a community gathers for Transgender Day of Remembrance events, a time to honor the lives that have been lost due to murders fueled by transphobia, or the suicides of trans and gender-nonconforming people for whom living in an oppressive environment was too much to bear any longer. It’s also a time where many celebrate and honor those who are still alive, for whom survival is a political act, for whom solidarity means everything in forging toward a more equitable situation for people who aren’t cisgender.

As the Advocate reported in May, a trans woman was murdered each week during the first seven weeks of 2015, before the news of London Chanel’s death added another number to the list. Unfortunately, it’s not always clear when a trans person has been lost, because they may be misgendered in death or because their case may have gone cold.

Dear Leelah: I'm sorry our world was not ready for you. Not ready to care for you + protect #girlslikeus. You matter. https://t.co/ZLQ4gKo1C3

7) The FDA still has discriminatory rules on blood donations for men who have had sex with men.

According to the federal policy, “Men who have had sex with other men (MSM), at any time since 1977 (the beginning of the AIDS epidemic in the United States) are currently deferred as blood donors. This is because MSM are, as a group, at increased risk for HIV, hepatitis B and certain other infections that can be transmitted by transfusion.” That’s despite recurring issues with blood shortages in areas across the country, the donated blood going through quality checks and tests before it’s ever transfused, and the support of major blood banks in easing the ban. The U.S. Food and Drug Administration in May formally proposed a lessened restriction, which would allow MSM populations to donate blood only if they’ve abstained from sex for a year.

8) LGBT sex workers have no legal protections and remain subject to criminalization.

Sex work is one of the world’s oldest professions and it’s legalized nationwide in other countries. However, without legal protections for sex workers in America, a number of whom are queer and/or trans, they remain vulnerable to abuse and criminalization because their activity is deemed illegal and must operate relatively underground.

“Sex work has always been relevant to queer and trans communities, both as a livelihood option and as an issue that critically informs the space between social and political margins, the centralities of queer and trans communities,” writes Svati P. Shah, in Scholar and Feminist Online, a Web journal of the Barnard Center for Research on Women. “The vital set of issues raised by the intersections of sex worker and queer populations has not always been addressed by LGBTQ organizations, however.”

9) Bullying and harassment remain prevalent at schools and workplaces for LGBT people.

According to the 2013 National School Climate Survey conducted by the Gay, Lesbian and Straight Education Network, more than 85 percent of LGBT students were verbally harassed at school. It also affects attendance rates, with roughly a third reporting that they’ve missed at least one day of school because of the threat of violence or bullying.

Marriage may be a positive signal of affirmation and acceptance for LGBT people, but there’s plenty more work to do before all LGBT people, in all areas of life, are truly valued and incorporated as full citizens.