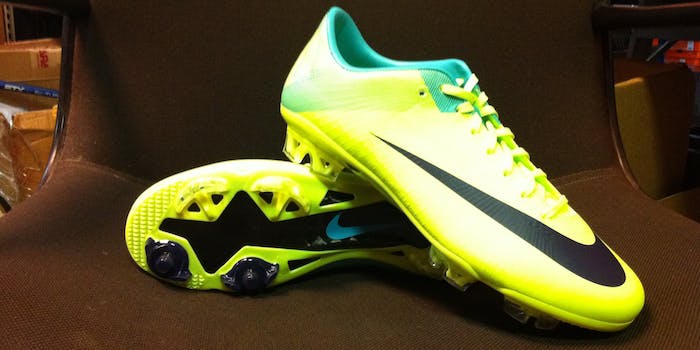 What does that even mean?

Advertising to Tumblr users can be an uphill battle, requiring at least a basic understanding of how Tumblr culture works.

Denny’s managed it by being weird and funny. Taylor Swift does it by acting like a normal 20-something cat blogger. Media outlets like MTV and Disney are pretty good at encouraging fans to post GIFs and promo materials and letting them do their own thing.

Nike, on the other hand, just got everyone on Tumblr to hate its brand with just one single-sentence ad.

The slogan appeared on Wednesday night, pinned to the top of every Tumblr dashboard and curiously impervious to adblock. It links through to a page of motivational GIFs and pictures from the Nike Women Tumblr account, inviting you to strive toward fitness and revel in the glories of Nike products. This experience apparently requires you to “embrace your uncomfort zone,” which is similar to embracing discomfort but with more #brand recognition and less grammatical accuracy.

Tumblr has hosted sponsored content and dashboard ads for a while now, but for some reason this Nike ad is even less popular than most. Most reactions boil down to one of these three things:

Since the stereotypical Tumblr user is a nerd, a social justice advocate or both, Nike may not have been the ideal brand choice for this website.

Then again, maybe this whole thing was concocted from the theory that any publicity is good publicity. And sure, half of Tumblr is making fun of the Nike ad and complaining about its corny slogan, but that does at least mean they’re paying attention to the brand. In a world of purposefully inaccurate Hostess snack Twitter ads, no corporate social media conspiracy theory is too stupid to believe.