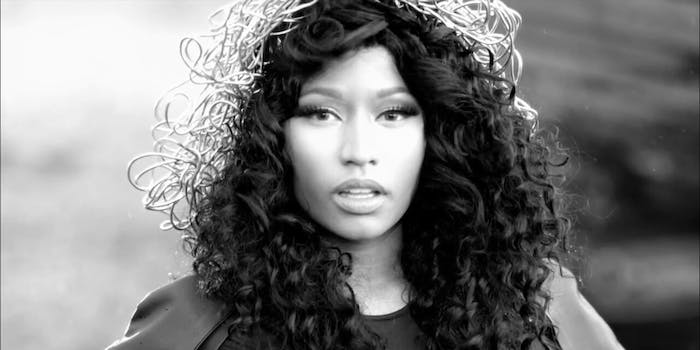 Why we need to talk about abortion

Nicki Minaj is being honest and so should we.

There is danger in a single story, as award-winning author Chimamanda Ngozi Adichie would say. In order to combat prejudice on everything from race to sexuality, psychologists and sociologists alike suggest that what’s needed is contact: The theory goes that the more exposure we have to a certain group, the less likely we are to make nasty assumptions about them. With this idea in mind, a growing number of women are sharing their experiences getting abortions. By publicly sharing their personal experiences, they hope to reduce the stigma that faces all people who get abortions.

Recent actions such as the 1 in 3 Campaign encourage women to tell their stories without fear of judgment. The grassroots campaign “builds on the success of prior social change movements, harnessing the power of storytelling to engage and inspire action and strengthen support for abortion access” and hopes to “help create a more enabling cultural environment for the policy and legal work of the abortion rights movement.”

“We have to make the political the personal now, and we have to stand up and put women’s real-life stories in the middle of this dialogue around abortion care or we’re gonna lose.”

In November of last year, the 1 in 3 Campaign organized an online abortion speakout that lasted eight hours. Participants included Lizz Winstead, the co-creator of The Daily Show, along with dozens of less famous individuals. Deb Hauser, the head of Advocates for Youth and contributing founder of the 1 in 3 Campaign, told NPR, “If we are silent, what’s left is this void for other people to fill, and they’ve filled it with a lot of shame and judgment. We have to make the political the personal now, and we have to stand up and put women’s real-life stories in the middle of this dialogue around abortion care or we’re gonna lose.”

With this context in mind, Nicki Minaj’s recent discussion in Rolling Stone about getting an abortion as a teenager is especially important. For someone whose every personal choice is intensely criticized and scrutinized, this is a big reveal. Casual fans of Minaj may not know that she previously mentioned this experience in an early mixtape track called “Autobiography.” In that song, she spoke directly to her unborn child in a remorseful way, attempting to come to terms with her conflicted conscience: “Please baby forgive me/mommy was young/mommy was busy tryna have fun/and now I don’t pat myself on the back for sending you back/Cause God knows I was better than that to conceive then leave you.” A new song on The Pinkprint gives second life to this decision, broadcasting her any extremely personal choice to a much larger and attentive audience.

The unapologetically honest “All Things Go” peels back the armor, as Minaj refuses to accept that there is shame in vulnerability. Minaj reflects that she still often thinks about the child she didn’t have, confessing in the song that her child “would’ve been 16, any minute.” Although she clearly feels conflicted about that time in her life, Minaj makes a point in the Rolling Stone interview to say that she is pro-choice: “It was the hardest thing I’d ever gone through… It’d be contradictory if I said I wasn’t pro-choice. I wasn’t ready. I didn’t have anything to offer a child.”

Minaj’s words echo the sentiment of some of the dozens of stories exchanged during the 1 in 3 Campaign’s national speakout. As a young woman named Liz said, “I was just 21. I hadn’t finished my degree yet. I was living with my mother, and I knew I could not bring that child into the world and give it the life that it deserved.”

Considering her level of visibility and fame, it’s commendable of Minaj to share her experience. Although she may not spell out her identification as a feminist in billboard-sized letters like Beyoncé, Minaj is adamant about empowering young women. She stresses to fans that embracing your sexuality and attaining an education are not mutually exclusive. Referencing her racy “Anaconda” video, she explains to Rolling Stone, “I stand for girls wanting to be sexy and dance, but also having a strong sense of themselves. If you got a big ol’ butt? Shake it! Who cares? That doesn’t mean you shouldn’t be graduating from college.”

Minaj is an important voice in the larger cultural discussion, putting an undeniably bright spotlight on a matter that many would prefer to keep hidden in the dark. She is putting a well-known face to a life-altering decision that many dissenters unabashedly vilify. Through the continued accessibility of these stories, multiple narratives chip away at the overall negativity and the jarring disconnect between political connotations and private association. According to research cited on Feministing, “One in three women in the U.S. have an abortion in their lifetimes, while nearly 40 percent of Americans claim they do not know anyone who has had an abortion.” Meanwhile, fictional stories about abortion in film and on TV tend to present abortion as far more dangerous than it is. Now, Nicki Minaj fans have a clear, real-life story to add to their knowledge of abortion.

Minaj is an important voice in the larger cultural discussion, putting an undeniably bright spotlight on a matter that many would prefer to keep hidden in the dark.

While pro-choice advocates have been encouraging people to speak up and share their stories about abortion, anti-reproductive rights advocates have been using abortion stories in service of exactly the opposite goal. Christian-backed site Abort73, for example, views the sharing of these emotionally charged stories as support of their cause. Founder Michael Spielmant told NPR, “I think that the more people are talking about abortion in public, the better it is for abortion-vulnerable children.” Spielman’s reasoning is that continued public discussion will trigger enough doubt to change the mind of a woman contemplating an abortion.

Unfortunately for Spielman, public transparency concerning abortion seems to ease the stigma, even resulting in support. A new study by public opinion researchers at UCLA found that “when anti-choice people hear in person accounts from women who have had abortions, they are more likely to start supporting reproductive freedom.” One of the biggest threats to the efforts of reproduction rights advocates lies in an absence of dialogue.

Whether it be megastars such as Nicki Minaj or women who will never be in the spotlight, the act of freely sharing abortion stories should not be dismissed or condemned. These abortion storytelling campaigns know that wider political success starts on a micro level. Changing the cultural climate allows more women to feel comfortable enough to speak out, thus humanizing an experience that some would prefer to keep locked up behind unflinching secrecy.

Vanessa Willoughby (@book_nerd212) is a writer and editor and is working on her first book.