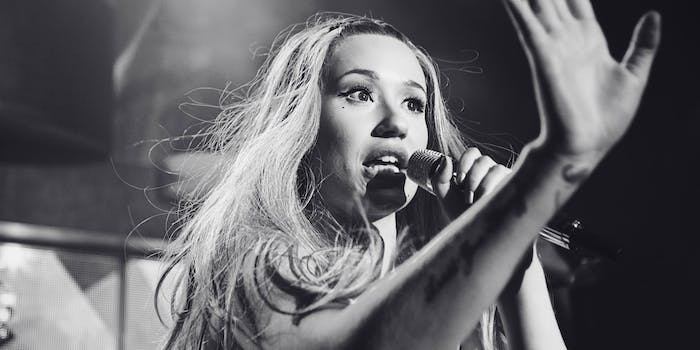 The Swaggy and Iggy show took a major blow when an ESPN announcer managed to drive a railroad tie through the symbiotic, harmonic convergence between the NBA and hip-hop music.

In ESPN’s Robert Flores’s “What did we learn?” bit, the SportsCenter anchor took a powerful pot shot at Los Angeles Lakers guard Nick Young and his girlfriend Iggy Azalea. Playing off Young’s recent revelation that a dolphin almost killed him when he was in Cabo San Lucas, Mexico, Flores blurted out, “So Nick, while dolphins are trying to kill you, your girlfriend is trying to kill hip-hop.”

Young, who misses close to seven of every 10 shots on the court, launched a long-range brick when he took to Twitter to threaten Flores. The former USC player then incoherently compared ESPN to BET. Clearly, he was not a media major during his days as a Trojan.

As for Flores, he didn’t break a sweat.

Sooo…what's been going on today??

Jumping on the notion that Young’s celebrity far outweighs his on-court talent, social media had a field day with the young man who probably wouldn’t have made the team back in the Lakers’ Showtime
era.

"U job". God help our children! They look up to this bum. He's a BUM JJ! @jaymohr37 #jaymohrsports #swaggyp

Robert Flores is my new favorite ESPN personality. Needs to double down and @ Swaggy P with a "Yo your girl's music is straight up trash"

After all the laughs die down, consider who we’re dealing with here—Young said his nickname, Swaggy P, was hand-delivered to him by God in a dream. Sadly, a pro-level jumper did not accompany that divine encounter.