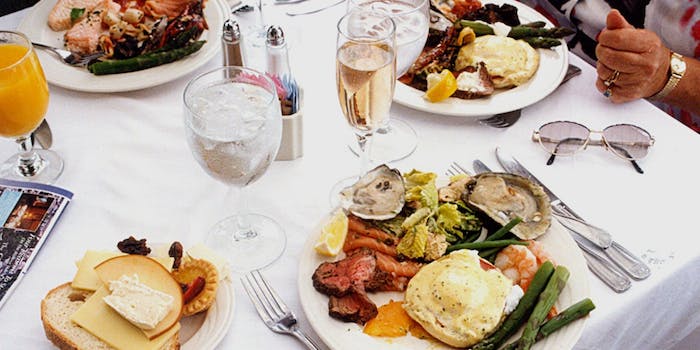 In defense of brunch

Here's how a simple meal became the Internet's most loved (and hated) pastime.

It is the scourge of our times. It represents the decay of modern society. It’s the most sinister, vile, dastardly force to sweep our cities and conquer our people since the bubonic plague.

You guessed it: We’re talking about brunch.

Last week, writer David Shaftel took a stand against the unholiest of unholy meals at the New York Times, penning a droll dismissal entitled, “Brunch Is for Jerks.” Staking his claim that brunch is pretty much the worst culinary tradition of all time, Shaftel wrote, “Once the domain of Easter Sunday, it has become a twice-weekly symbol of our culture’s increasing desire to reject adulthood. It’s about throwing out not only the established schedule but also the social conventions of our parents’ generation. It’s about reveling in the naughtiness of waking up late, having cocktails at breakfast and eggs all day. It’s the mealtime equivalent of a Jeff Koons sculpture.”

Shaftel’s assertions that brunch is kitschy, self-aware, and relentlessly indulgent aren’t necessarily wrong. However, his indictment is still flawed. In prescribing brunch all the symptoms typically associated with social outrage, he reveals that brunch itself was never really his target at all. Instead, Shaftel appears to be taking on, what is in his mind, an even more insidious foe.

First of all, if it feels like brunch is having a moment right now, let’s pump the breaks and remember that it wouldn’t be the first time. Brunch has been a cultural lightning rod for decades, and as long as there have been people who love it, there have also been people who hate it. If anything, Shaftel’s piece aims to be the culmination of our nationwide brunch conversation, not the beginning of it.

Salon’s Mary Elizabeth Williams responded to Shaftel’s take on brunch by cataloging its ascension in the American consciousness, writing:

Brunch was already a punchline about yuppie excess back in the eighties. In 1990, Marge Simpson was nearly seduced by a bowling instructor who opened her eyes to the meal that’s “not quite breakfast, it’s not quite lunch, but it comes with a slice of cantaloupe at the end.” The movie L.A. Story skewered caffeinated brunch culture over two decades ago. How I Met Your Mother did an entire farcical brunch episode eight years ago, and in 2012, Portlandia put the nail in its coffin in a brunch-themed episode straight out of Samuel Beckett. When a character in a movie or TV show says the word ‘brunch,’ it is generally taken as a signal that this is a scene of pretentious, possible jeroboam of champagne swilling clueless excess.

She goes on from there to talk about perceptions of brunch in the Internet era.

So does brunch really need a takedown? You mean the meal that Gawker said ‘sucks’ four years ago—and Washington City Paper used the same word for two years earlier, saying ‘It’s phony, it’s stupid, it sucks?‘ Oh, right, brunch, the thing the Village Voice also said ‘sucks’” three years ago, and Anthony Bourdain called ‘a dumping ground for the odd bits left over from Friday and Saturday night’ fourteen years ago in Kitchen Confidential. The only meal that is the first word of a common refrain that ends ‘…is for a**holes,‘ the meal whose crimes, of course, Buzzfeed has listicled. Brunch: It’s like watching porn. We’ve all done it, but nobody likes to admit to enjoying it.

Have we all “done” brunch though, in the way Shaftel describes it? Obviously, the bigger the metropolitan area, the more likely it is that a distinct brunch culture will emerge. And New York certainly isn’t the only city where brunch has become an intense undertaking. Reacting to Shaftel’s op-ed, Samantha Bakall at The Oregonian observed, “In Portland, our brunch culture borders on addiction. Most of us have done it at least once, perhaps more than a few times, and when brunch lines creep up to two hours, many of us will wait.”

However, the detailed conditions Shaftel describes when talking about the New York brunch scene feel rather specific. He describes brunch as the most “visible” evidence of a “demographic shift,” wherein the middle class and young families are being pushed out of increasingly unaffordable neighborhoods. He also cites author Shawn Micallef in the piece, whose book, The Trouble with Brunch: Work, Class and the Pursuit of Leisure, discusses similar concerns. Part of the description for Micallef’s text even reads, “In some ways, brunch and other forms of conspicuous consumption have blinded us to ever-more-precarious employment conditions.”

It seems awfully unfair though to single out brunch as the greatest indicator of the many problems inherent in city living. Shaftel and Micallef may be correct in suggesting that brunch culture, at least in New York, is synonymous with the “trendiness” factor of specific areas, but if you really think brunch is the most obvious side effect of this country’s shifting urban landscapes, then you haven’t been paying attention. As Gizmodo’s Alissa Walker countered, “The crowds can be totally annoying, but partaking in a long, lazy Sunday breakfast is certainly not endemic to the gentrifiers he points his fingers at.”

Yet Shaftel and Micallef’s problem doesn’t seem to be with some mysterious, invisible party of brunch-goers, slowly driving good old, regular, salt of the earth urbanites out of their homes and minds. They have a very specific grievance. When Micallef addressed “conspicuous consumption,” he can only be referring to one group. “While Sundays were traditionally reserved for family,” Shaftel argued, “we now have crowds of unfettered young(ish) people with no limitations on their pursuit of weekend leisure.”

That’s right, Shaftel, and to a lesser extent Micallef, are going after young—or rather, young(ish)—people. Their objection to the “pursuit of leisure,” in this case, is tied fairly directly to the common stereotypes attached to millennials. Which is to say that all millennials are booze-guzzling, entitled narcissists, obsessed with chasing pleasure above all else. Never mind that many of these stereotypes have now been proven to be largely untrue.

In Shaftel’s mind, this is a generation who is still suckling off their parents, taking good neighborhoods away from honest, hard-working family folks, who can no longer compete with a bunch of trust-funders and trophy kids, free to spend their money on endless brunches, and whatever else is trending today. He doesn’t have a problem with brunch, he has a problem with the people enjoying it. After all, as he says in the article, he’s 40 now. He’s earned the right to tell people who are younger than him how to spend their money, and when they’re being immature and foolish.

Again, Shaftel isn’t necessarily wrong—about some millennials—but every generation has had spoiled “jerks” in it. The laissez-faire attitude that Shaftel wants to ascribe to all of New York’s young citizens, however, simply isn’t true. In her take on Shaftel’s declaration, Jezebel’s Erin Gloria Ryan said, “I’m no defender of getting asshole-drunk at 10am and spending the rest of the day puking on strangers’ stoops, nor am I willing to spend more than 40 minutes tops waiting for a table at the Russ & Daughters Cafe on the Lower East Side. In fact, I’d rather fry an egg while pantsless and listening to Radiolab than cram into Park Slope’s Rosewater asses-to-elbows on a Saturday afternoon.”

But Ryan also believes that Shaftel is extremely misguided in his interpretation of her peers’ relationship to brunch. She goes on from there:

What Sheftel doesn’t seem to grasp is that brunch, at least in my childless urban experience in a city far, far away from any members of my immediate or extended family, serves as a sort of surrogate family time. Every one of my friends works ridiculously hard at their ridiculous jobs so that they can afford to live in this ridiculous city, in a ridiculously small apartment too small for hosting much of anything, much less a get together. I don’t have the time or the energy or the space during the week for much more than a quick evening drink after work and before I get home and do more work. What I do have is weekend afternoons to get together and have a cocktail and eggs benedict with a friend I haven’t had time to talk to in three months. Believe me, if I had the luxury of the time and money to fly to Minneapolis every other weekend to hang out with my parents and their new puppy, I would. So would most New York City transplants in the brunch generation.

The final insult in all of this is that Shaftel actually recalls several languid brunch experiences from his own younger days. Which is why it’s so vexing to listen to him judge the young brunch crowds of today’s New York City, just because he’s gotten older. As Ryan notes, “One of the more horrifying elements of aging, for a person whose identity has historically revolved around youthful coolness, is coming to terms with the fact that there are always going to be people younger and more carefree than you are, and the older you get, the more of them there will be.” So perhaps, Shaftel’s curmudgeonly missive is merely a reaction to his own fears about aging.

The Internet generation didn’t become the “brunch generation” by accident. They were taught about the hipness of brunch from those who came before them, like Shaftel. And sure, maybe he’s right in that they’ve taken it a little too far. But still, whether you hate brunch, or love it, it’s not worth condemning everyone under 30 over. Every generation looks like misbehaving whippersnappers to the generation above it. Maybe by the time they’re Shaftel’s age, millennials will hate brunch, too.