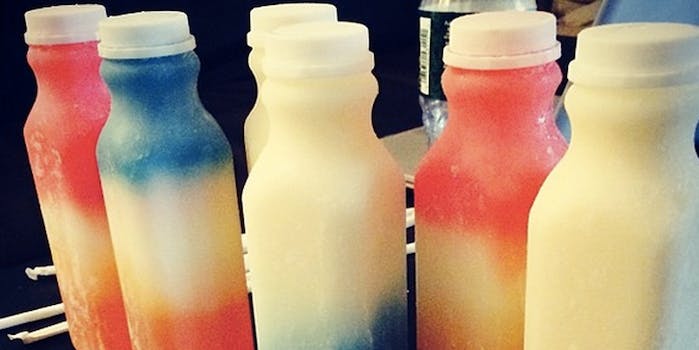 The unregulated alcoholic slushie drinks are on thin ice.

Like Four Loko, the sugary-sweet, fruit-flavored, turbo-alcoholic concoctions known as “Phrosties” were too beautiful for this world. Senator Chuck Schumer (D-N.Y.) has announced his intention to clamp down on the unregulated drink, and New York State’s Liquor Authority is currently investigating the delivery business, which is run through a shady Instagram account.

The various flavors of boozy slush—whose potent ingredients remain a mystery—are theoretically available 24/7, for $10 a bottle. Customers have to follow @phrosties on Instagram; once they’ve been friended back, they can text an order along with their address and phone number, then sit back and count the minutes until it’s time to get wasted. The account had amassed some 16,000 followers before it was deleted on Monday, possibly to avoid legal consequences, though the handle is now active again, with nearly 300 hopeful followers.

“They seem to be sold online without limitations for age. A 12-year-old can probably buy these ‘sloshies’ online, get it and enjoy it because it’s filled with fruit juice and fruit punch and all the things that taste sweet and nice,” Sen. Schumer said at a press conference, according to the New York Post. The New York SLA is therefore “looking into the illegal sale of this unregistered and potentially dangerous alcoholic drink by an unlicensed business,” CBS reported.

While the Phrostie’s days may be numbered, it’s likely the idea could catch on and spread to different parts of the country, even in modified form. And since parts of New Jersey are within the established delivery zone, it’s possible only New York will suffer from the crackdown. Either way, this afternoon is going to be a scorcher—so sample these bad boys while you still can.

H/T The Awl | Photo via kendralynn5/Instagram