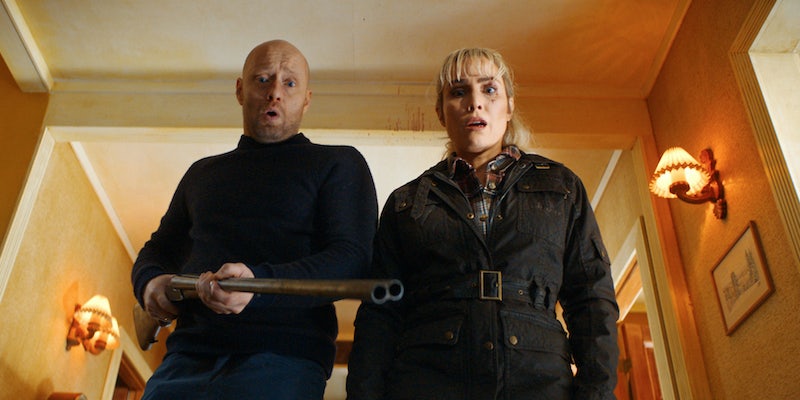 “Lisa is Lisa,” says Lars (Aksel Hennie) at the beginning of The Trip, a dark comedy from Norwegian director Tommy Wirkola. It’s his resigned answer to a question about how his wife is doing, but also a bit of foreshadowing.

We meet Lisa (Noomi Rapace), an actor, and Lars, a TV director, during a rough patch in their marriage. They argue about their languishing careers, there’s jealousy around other people, and also resentment. Lars has come up with a solution: He’s going to kill Lisa during a weekend trip to his father’s cabin.

Once there, Wirkola takes his time building the tension, infusing it into a Scrabble game and lakeside dinner. Lisa eventually reveals she knows about Lars’ plan and came prepared with her own defense (and plenty of comments about how dumb his plan is). When the bumbling hitman Lars hired shows up, he’s brought into their bickering.

There are plenty of marriage stories to consume right now, but The Trip thankfully steps back from the sadness of a crumbling relationship and instead presents its chaotic flipside. In the second act, The Trip pivots to a home invasion thriller when three escaped convicts who were holed up in the attic come crashing into Lisa and Lars’ life.

There are some scenes of violence that go on for a little too long, especially one involving Lars being threatened with rape. Towards the end, there are a few too many sudden revivals of characters you thought were definitely dead. Aside from some needed cuts, however, The Trip is fun. Rapace previously worked with Wirkola on Netflix’s What Happened to Monday, and it’s a thrill to see her in comedic mode; The Trip certainly stands in contrast with her other recent movie, Lamb. Please: Put Noomi Rapace in more comedies.

Despite all the violence and blood, Wirkola still views Lisa and Lars with empathy—there are some tender moments among the chaos, but he also doesn’t shy away from letting them unload their anger and resentment. He wraps their traumatic experience into a wicked (and meta) ending. Unfortunately, Netflix hasn’t really promoted The Trip, but it’s a pitch-black comedy that will satisfy action and horror fans.