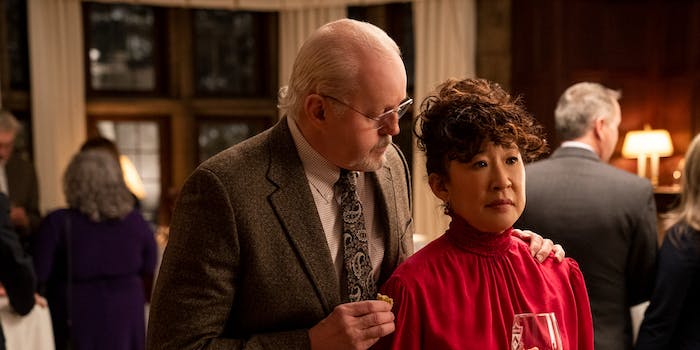 Set in a college English department, The Chair offers a funny and nuanced look at campus culture wars. As the first woman and the first person of color to lead the department, Professor Ji-Yoon Kim (Sandra Oh) plans to shake up her college’s old-fashioned image. But she soon learns that her dream job is actually a nightmare, torn between clashing factions at work and at home.

Pembroke College’s dean (David Morse) sees the school as a business, ignoring Ji-Yoon’s expertise and scuppering her plans to shake things up. And within the English department itself, we have an awkward divide between elderly white professors who are set in their ways (Holland Taylor and Bob Balaban) and the young Black academic superstar Yaz McKay (Nana Mensah). Our final main character is Ji-Yoon’s love-interest Bill Dobson (Jay Duplass), a popular professor in the midst of a chaotic midlife crisis. Everyone aside from Yaz is a total mess, with Ji-Yoon struggling to keep the peace while raising her troublesome daughter (Everly Carganilla) as a single mom.

Impressively well-cast, The Chair is anchored by Sandra Oh and Jay Duplass. Warm and sympathetic, Oh is a skilled physical comedian who thrives when playing characters at the end of their tether. Meanwhile, Duplass’ scruffy charm is essential to making Bill Dobson anything other than infuriating. In the narrative at hand, Bill is an avatar of white male privilege, hanging onto a top-tier job despite erratic behavior and public scandal. Objectively speaking he should face repercussions, but we understand why Ji-Yoon is rooting for him to pull through. Despite his many faults, he’s a likable guy.

Yaz and Ji-Yoon are clearly the most competent people in the English department, and the ones who work hardest to make the college a better place. But from a storytelling perspective this means that actress Nana Mensah arguably gets the short end of the stick, because Yaz is the one character who doesn’t get to be funny. Her entire role revolves around the frustrations of being overlooked as a talented Black woman in a racist workplace, without the zaniness offered to Sandra Oh and the others.

The Chair is the first Netflix producer credit from Game of Thrones creators David Benioff and D.B. Weiss, who signed a $200 million deal with the streaming service in 2019. It’s an unexpected project for them, but things make more sense when you learn that they’re co-producers rather than showrunners, with actress Amanda Peet (married to Benioff) as the lead writer.

Fueled by toe-curlingly effective cringe comedy, The Chair understands how to combine the personal and political. On paper, you might assume that Ji-Yoon would agree with the dean’s request to fire some of the old, white professors, who are definitely not pulling their weight. But Ji-Yoon views these cantankerous old scholars as her academic family—an emotional barrier to moving the department in a more progressive direction. These complex relationships feel messily authentic, but when it comes to more directly political topics, the show isn’t quite as smart.

One subplot involves Bill Dobson getting canceled for making an offensive joke in class. Unlike some of his colleagues, Bill isn’t a bigot, and this scandal could easily have been avoided. But he’s fundamentally incapable of taking the backlash seriously, spawning campus-wide protests. This is where the show’s lack of student perspectives becomes an issue. The Chair generally provides a down-to-earth view of the way personal motives intersect with political biases. But compared to the well-rounded roles for old white professors, the students are tertiary characters. Their complaints about campus racism are valid, but their reaction to Bill Dobson feels more like Twitter backlash than real student activism: a mob who turn on a dime and refuse to listen to reason. It’s the one point where the showrunner’s Hollywood background shines through, in a show that otherwise feels sly and well-observed.