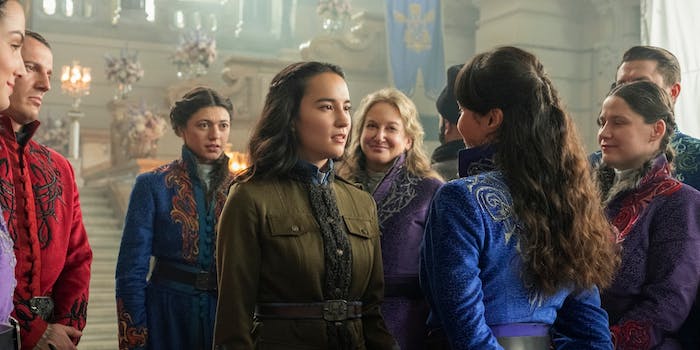 The inconsistent depiction of racism in Netflix’s ‘Shadow and Bone’

The fantasy series features several characters of color, but only some of them experience racism.

Netflix’s Shadow and Bone includes all the classic touchpoints of a new juggernaut fantasy series: a coming-of-age narrator, an ominous place full of darkness and monsters, period costumes, and British accents. But the series also added a new ingredient it wants to make sure we’re aware of from the jump: racism!

“I live in East Ravka, but I’ve never been welcome here,” Alina (Jessie Mei Li) narrates barely thirty seconds into the first episode, “because I look like my mother, and she looked like the enemy.”

Adapted from the massively bestselling YA fantasy series by Leigh Bardugo, Shadow and Bone includes characters from both the original “Grishaverse” trilogy and the follow-up Six of Crows duology, combined into one contemporaneous plotline. The series is an ensemble effort, clearly channeling the multi-POV magic of TV fantasy predecessor Game of Thrones, but the lead character is Alina, a teen mapmaker who ends up being one of the most powerful wizards (Grisha) known to the world.

Warning: This article contains spoilers for Shadow and Bone.

In the original Grishaverse books, set in the Russia-inspired nation of Ravka, Alina (along with most of the main cast), is assumed to be white. So when Netflix announced the cast for the adaption in 2019, many fans were as thrilled to see the diversity of newcomers such as Kit Young (Jesper) and Amita Suman (Inej) as they were for the coming Ben Barnaissance. But Netflix’s decision to cast half-Chinese actor Jessie Mei Li as protagonist Alina was easily one of the most significant and exciting in terms of added representation.

“It’s about someone who doesn’t feel like they fit in, so the decision to make Alina half Shu just felt natural,” Li told Teen Vogue about the change to make her character canonically part-Asian (Shu Han is the world’s analogue for Mongolia and China). “It wasn’t just shoved in there for the sake of diversity, it made the story richer.”

On a plot level, the change does indeed seem to be one of many tweaks Netflix has made to the source material that makes sense—Alina is a lonely orphan who desperately fights her Chosen One status with wishes of just being a “normal girl.” In a line from the book recreated verbatim in the show, General Kirigan/The Darkling asks her if she’s so anxious to be like everyone else. In the books, Alina’s desire to be ordinary is mostly just classic YA protagonist syndrome, but on the show, when Li ruefully crinkles her brow and replies “It would be nice to know what it feels like,” it’s much easier to believe she has good reason to want to escape notice.

But while the change to Alina’s race is a boon representationally, Netflix’s introduction of anti-Asian racism into the fantasy world is often clumsy and inconsistent, and it had many viewers taking issue with how the show chose to depict racial inequality.

The show’s heavy-handed fixation on Alina’s experience of anti-Shu discrimination via insults such as “rice-eater” and comments on her eye shape feels particularly short-sighted when the cast is full of other Asian and non-white actors who never see so much as a microaggression. There’s even a truly bizarre moment in which, as Alina is welcomed warmly into the embrace of a many-hued pack of Grisha (including author Bardugo herself), her mean-girl rival Zoya ruins the warm fuzzies by hissing an acerbic “you stink of the orphanage, half-breed” in her ear. This might work as an apt demonstration of racism existing in all strata of society if Zoya herself were not portrayed by South Asian actor Sujaya Dasgupta.

This is just one of several instances in which the series, in an effort to convince us of Alina’s alienation, seems to forget how racism actually works. We’re meant to believe that the world of Ravka is so rife with persecution that Alina would be sent empty-bellied from the mess hall, but that Black characters such as Jesper and Nadia would have no issue at all strolling through the capital, or that a girl like Inej would be merely an exotic curiosity, or that the onus of crossing the Fold (a border metaphor if there ever was one, especially with the introduction of a Coyote-like smuggler character in The Conductor) wouldn’t overwhelmingly fall on ethnic minorities. Even orphanage bosom-buddy Mal’s (Archie Renaux) supposed racial solidarity with Alina is never quite specified, and it seems to be all but forgotten by episode three, while the Sun Summoner is still fielding barbs about her language skills.

Well, one might point out, Ravka isn’t at war with those other places that Black or brown people would be from—they’re at war with Shu Han, and that’s why Alina alone is so Othered in a cast that would otherwise be worthy of a college brochure. But if national politics were the sole determiner of who gets racially profiled, then wouldn’t we see a little tow-headed refugee from Fjerda (Ravka’s northern, Scandinavian-flavored aggressor) teary-eyed after being called “meatball-eater”? We don’t, thankfully, because even the series must realize how ridiculous racializing blue-eyed Nordics would be—but they don’t hesitate to include an equally cringe-worthy moment with a young Alina of this nature. Shadow and Bone banks on the very real phenomena of anti-Chinese racism to make Alina’s backstory buyable, while conveniently ignoring the historical and current ties of ani-Asian sentiment to white supremacy.

Cherry-picking racial history to bolster casting choices without actually having to follow through on the implications of each character’s race is a classic in the Netflix series playbook, perhaps most notably executed in regency fantasia Bridgerton, where race-blind casting of various melanated dukes and marquesses was based on actual historians’ speculation over Queen Charlotte’s race while simultaneously glossing over, uh, slavery. Shadow and Bone follows in this tradition by making the race of Alina’s actor plot-relevant in much the same way Regé-Jean Page’s was as the Duke of Hastings—all while completely ignoring the ethnicities of anyone else on the show. Inej never calls out the orientalism of her former brothel, Mal and Alina never discuss how hard it is to not only be orphans, but ethnic orphans, Nadia never bemoans being the only Zemeni (Black) Grisha left after her skinfolk gets clotheslined by a volcra. The closest we get to some hint of the other characters even acknowledging each other’s race is Zoya correcting a Ravkan courtier’s profiling of Inej as Zemeni, but if Zoya does so because she herself is Suli, or because she’s a know-it-all, or because of Ethnically Ambiguous Solidarity, we’ll never know, because none of the brown kids talk to each other about race on this show.

Netflix’s racial inconsistency is made even more complicated here by the fact the Shadow and Bone source material is already a racial allegory, with the powerful-but-historically-persecuted Grisha standing in as a fantasy metaphor for the Jewish population in Russia and abroad. “When I created the Grisha, it was important that they be powerful but that they kind of represent the Jewish brain trust that developed before World War II and after World War II in the U.S.,” Bardugo, who is Israeli-American, told the Atlantic in 2012. “They’re these very talented people that were drawn from all over the world and cast out of places, persecuted, put to death, put in camps. So they all ended up in this one place, and for better or for worse—I think for better—they developed weapons and became a kind of brainy fighting force…that was sort of always in my mind in the way that Grisha had been treated.”

The series depicts the fantasy racism of Grisha persecution much more convincingly than it does actual racism—in a long flashback of Kirigan centuries prior (still Ben Barnes, but now with braids) when Grisha were hunted down and killed, as well as in Grisha Nina Zenik’s (largely separate) plotline of being kidnapped by Fjerdan witch-killers. Having fantasy racism and actual-race-racism co-exist in the same fictional world is a historically fraught needle to thread, however, and certainly not a pitfall Netflix manages to avoid here. Magical persecution can’t be equated to real-world racial dynamics (see: Bright), and the fantasy axis of discrimination is seldom implemented with the intersectionality needed to gel with real-world marginalizations. So Netflix gives us the strange arc of a girl who is downtrodden because of her race ultimately finding belonging and actualization, not among those who are also racially persecuted but with the magically persecuted Grisha in the hot evil wizard’s coven of murder-witches. It’s not Mal who appeals to her with a shared history of discrimination, but Kirigan, when he tries to get her on board the Grisha Supremacy bandwagon by saying she, “of all people,” should understand what it’s like to fear “being murdered simply for being.”

The series misses a huge opportunity to interweave these elements of the worldbuilding by having Alina (and Zoya, Nadia, and the other ethnic extras they peppered the Little Palace with) find power and acceptance among the Grisha because they’re a community with a history of persecution, and in fact are more racially diverse than the general population because of it. As perfect as Ben Barnes is in the role, I have to wonder about the sort of story that could be told if the Darkling were, well, dark. But because Netflix periodically forgets they’ve added racism to this show, this is an interplay viewers never get to investigate.

But by far the simplest solution, and one Bridgerton might have also benefited from, would be to resist the urge to explain the presence of non-white characters altogether. It’s not as if England or Russia have ever been entirely white people, and in settings as fantastic as Shadow and Bone, the impulse to justify Alina’s race with a backstory full of racism is more a symptom of white showrunners’ anxieties than it is an accurate reflection of a racial experience. The value of Asian representation on-screen is significant whether or not it’s treated as a plot point, and having so many actors of Asian descent in the main cast has been meaningful to viewers regardless of the show’s fumbles.

For fans of color in a fantasy franchise, the power of having any representation at all can’t be discounted, especially when compared to the lily-white alternative, and if it takes a few tries to get it right, so be it. With a second season basically guaranteed and other part-Shu characters on the horizon, we can only hope Netflix will have plenty of opportunities to refine its approach. Until then, let’s hope “rice-eater” never comes up again.