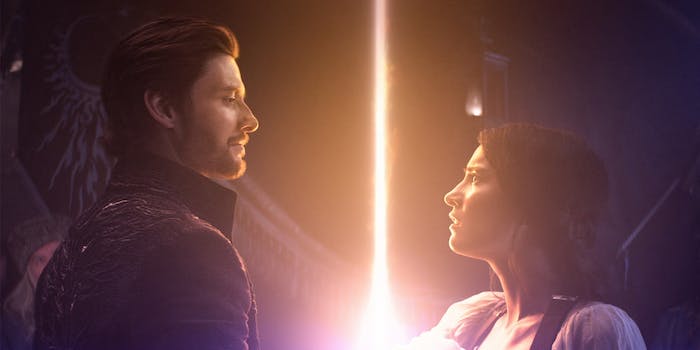 It's an immersive and ambitious adaptation that uplifts its source material.

Netflix’s Shadow and Bone can, at times, feel like an internet fever dream come to life. It stars perennial Tumblr fancast favorite Ben Barnes in a role that readers of Leigh Bardugo’s books have positioned him in at least as far back as 2013, dripping with charisma with every conflicted look and swish of his oversized cloak. At the helm is Eric Heisserer (Arrival), who, more than four years ago, tweeted his love of a book he would one day help adapt at the woman who wrote it. It’s full of sizzling chemistry between multiple characters, mutual pining and an assortment of romantic tropes, and fleeting looks that are rife for analyzing in multi-tweet threads.

Release Date: April 23, 2021
Creator: Eric Heisserer
Streaming: Netflix
An ambitious adaptation that bridges Leigh Bardugo’s ‘Shadow and Bone’ and ‘Six of Crows’ books into an immersive and immediately addictive series that largely improves and expands upon its source material.

Shadow and Bone is an adaptation of not one but two bestselling series by Bardugo—the Shadow and Bone trilogy and the Six of Crows duology—that was made possible by embedding the characters of one series (Six of Crows) into the earlier timeline of the other (Shadow and Bone). In theory, it shouldn’t work—or the execution could be muddled at best. It’s a pitfall that Shadow and Bone avoids, with one exception. The end result is two fully fleshed and intricately detailed worlds that interact with each other in fascinating ways, and in some instances, it even improves upon the source material. But amid its grand settings, displays of fantastical abilities, the manifestation of myths and legends, and enough engaging (and occasionally messy) worldbuilding elements to inspire its own glossary, Shadow and Bone always remains grounded by its characters.

It’s almost a cliché to compare a fantasy epic to Game of Thrones (for better and for worse) at this point, but Shadow and Bone wisely took one of Game of Thrones’ early lessons to heart: start small. While both series take place in fantasy worlds that wear their influences from our world on its sleeve—Game of Thrones’ Westeros to the U.K.; Shadow and Bone’s Ravka to early 19th-century tsarist Russia and the city of Ketterdam to a blend of cities including Amsterdam—they both also don’t try to overload you with an information dump within the first few minutes of the show. Shadow and Bone keeps it simple and lets you find out more as it develops, but it doesn’t skimp on the sheer level of detail it conveys; the visual effects also make their powers and fights feel believable. While it’s possible that people unfamiliar with the books will still find it daunting, the scope is more approachable than some of its other contemporary counterparts.

Shadow and Bone is set in a world where some people known as Grisha can manipulate matter (e.g. metals, elements, the human body), which they call Small Science (instead of magic). Hundreds of years before the story begins, a Grisha known as the Black Heretic created the Shadow Fold, a vast and enveloping darkness that’s home to vile creatures called volcra and is so dangerous for anyone who enters it that those who survive the crossing proudly keep permanent tallies on their arms.

For the first time in centuries, Ravka is given a flicker of hope in Alina Starkov (Jessie Mei Li), a mapmaker who discovers during a fateful trip across the Shadow Fold that she can summon and manipulate light, a discovery that leads many to believe that Alina is Sun Summoner, a mythic figure who’s been prophesied to one day destroy the Shadow Fold. “It was a Grisha who created the Fold,” one of the Grisha tells Alina. “If a Grisha destroys it, maybe…maybe we wouldn’t need those high walls to protect us anymore.”

General Kirigan (Barnes), a Shadow Summoner and the leader of Ravka’s Grisha’s army who’s been trying to find a way to destroy the Fold, finds the one person in the world who can make that possible. But, like many heroes before her in decades of fantasy storytelling, Alina wants nothing to do with her own powers. She’s spent her life being ostracized for being an orphan and for being part Shu Han (one of Ravka’s warring neighbors)—she’s often on the receiving end of racist and xenophobic comments and microaggressions by fellow Ravkans—and doesn’t want any of the notoriety that comes with being Grisha.

She also doesn’t want to leave Mal Oretsev (Archie Renaux), her only friend growing up, behind; a series of flashbacks over the season reveals just how far each of them will go to stay by the other’s side. But like many heroes, Alina doesn’t have much of a choice as Ravka’s warring neighbors see an opportunity to take her down before she can become a real threat. And it doesn’t become any easier once she begins her training, which includes some of the old problems—and many new ones.

Across the sea, the trials and tribulations might not be as fantastical in Ketterdam but the criminal underworld offers just as much intrigue. At the center are an unlikely trio in Kaz Brekker (Freddy Carter), the ruthless ringleader of the Crows who has to constantly stay one step of both allies and foes; Inej Ghafa (Amita Suman), who can sneak up on nearly any opponent as the Wraith and sticks to her own moral code; and Jesper Fahey (Kit Young), who can hit any mark with his guns (or his charm) but is loath to skip any cards table.

They’re presented with the heist of a lifetime that has a payout so large that it might be worth all of the danger and risk of death—which includes traveling through the Shadow Fold and back—it would entail. It has the opportunity to satisfy a thrill, rectify misdeeds, and fuel vengeance. While some of the Crows’ backstories are more explicitly depicted than others, there are more than a few hints and nods of their respective traumas that book fans will easily pick up on. (Shadow and Bone does touch on darker elements even outside of the Crows’ experiences, but it’s never gratuitous in its presentation or exploitive of those who it affects.)

It takes a while for these tonally distinct stories to cross paths, so the two halves of a whole can feel a bit disjointed after a while. But cross they do in some clever and unexpected ways, lending themselves to scenes that can be both incredibly meaningful for those characters and blatant pieces of fanservice. In the case of the latter, it’s hard to mind it too much because it’s also a lot of fun.

The biggest stumbling block of season 1 involves Nina Zenik (Danielle Galligan), a Grisha Heartrender (who can control internal organs), and Mattias Helvar (Calahan Skogman), the Fjerdan witch hunter who sees the Grisha as less than human. Unlike the other characters in Six of Crows, their subplot has a basis in the books. It’s fascinating and engaging to watch as it plays out, but it’s so separated from the other threads of the season that it stops any momentum that builds up whenever they do appear. At times, it almost feels like one big set up for something bigger.

But Shadow and Bone elevates so much of what made Bardugo’s series work as well as improve on some of its shortcomings. Barnes is practically perfect as Kirigan, relishing in the flair for the dramatics—his character reveal occurs piece by piece in several scenes spread across two episodes and Kirigan is not above riding in slow-mo with a billowing cloak behind him—and the conflict that comes with the momentous task that Kirigan and Alina. But he also isn’t above a snarky or sarcastic quip. Mal, a character who is much more divisive in the books, gets a major revamp that puts him on a more equal footing with Alina; you understand the full extent of their bond much more clearly. Li shines (no pun intended) as she gives Alina more depth, especially as she grows into her own as the Sun Summoner.

You might figure out part of where Shadow and Bone is going early on while other elements might only become known once the gambit is revealed, usually with a series of connective clips that might not feel out-of-place in a Steven Soderbergh movie. But it also seems to have learned from some of the mistakes of its predecessors. It’s never dull, and with a compelling cast of characters in its arsenal above all else, Shadow and Bone is a fantasy epic that might just become your newest obsession.

Shadow and Bone debuts on Netflix on April 23.